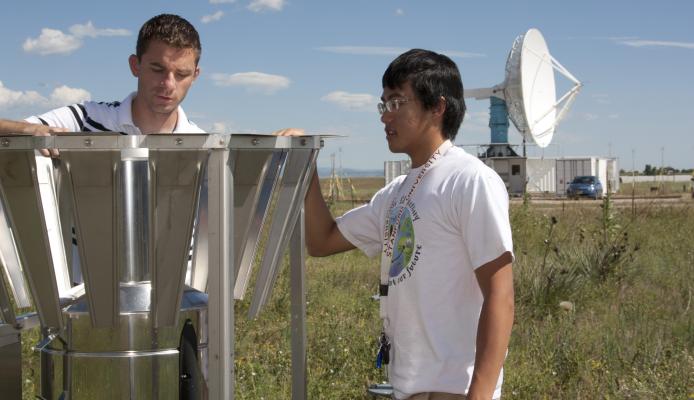 Most high school juniors and seniors this time of year are thinking about their summer plans: babysitting, mowing lawns, scooping ice cream, maybe college visits and applications. Other students are thinking about their future beyond their summer break. These motivated kids are vying to be accepted to NCAR’s competitive Pre-College Internship Program (PRECIP), a six-week program giving students a hands-on introduction to the atmospheric and related sciences, including meteorology, chemistry, physics, engineering, mathematics and hydrology.  In particular, this program seeks students from groups that are historically under-represented in the sciences, including Black or African-American, American Indian or Alaska Native, Hispanic or Latino, female, first-generation college students and students with disabilities.  Half of the high school protégés accepted to PRECIP hail from Puerto Rico; some of them leaving home for the very first time on their own.

While I initially felt trepidation at studying engineering at a rigorous school (Colorado School of Mines), my experience at UCAR in the PRECIP program allowed me to have more confidence in myself as a student and a woman engineer in a predominantly male field. At Mines, I face a ratio of 20% women to 80% men. I was the only woman in my chemistry lab as a freshman, and even now I can count the number of women in some of my classes on one hand.

Being a minority in engineering school was something I had anticipated and is something I am used to now, but I believe that participating in the PRECIP program helped prepare me in many ways to stop seeing underrepresentation as [an] obstacle, and start seeing it as a way to shine. In addition, as I analyzed my climatology results and wrote my abstract during the final days of PRECIP, I was guided through the process of publishing scientific research for the first time by the PRECIP program managers. Now that I am in college, that guidance is extremely useful in research and laboratory settings.

- Marisa LaRouche, junior in Environmental Engineering at the Colorado School of Mines

Research suggests that a combination of the authentic, hands-on research experience with a mentor helps motivate and prepare students to pursue studies in science, technology, engineering and mathematics (STEM). Studies also show the benefits of engaging students in science and research as early as high school, before they decide on a college or major. During these six weeks at NCAR, the students work with a scientist or engineer on real-world research and participate in writing workshops designed to teach them how to write scientific abstracts of their work. Their hard work ends with a scientific poster that summarizes their work and results, culminating in a presentation at a student poster session. They’re getting a taste of the scientific method, scientific writing, and presenting their research and findings – not your average summer job.

This high-school program was launched in 2009 as a small pilot program at NCAR.  Modeled on the highly effective Significant Opportunities in Atmospheric Research and Science (SOARS) Program for underrepresented undergraduate students, high school students were teamed with mentors throughout NCAR/UCAR and allowed to work up to twenty hours a week for a five-week period. Building on that successful initial effort, the program expanded in 2010 and offered summer research internships to ten Front Range high school students. Support from 2012, providing six-week internships for twelve additional students. Students from groups traditionally underrepresented in the sciences participated in the program, and many of them have entered college as science majors. In 2014, RAL continued to fund the program from its diversity fund and it was formally renamed PRECIP —PRE-College Internship Program.

Scott Landolt, a scientist in RAL’s Aviation Applications Program, is the force behind PRECIP. He wears many hats at RAL, including winter weather and aircraft deicing research and maintaining gauges in the mountains. In the summer he chases tornadoes. And in case he has some down time, he’s hard at work getting a Ph.D. Makes perfect sense that this over-achiever has embraced PRECIP, as the principal investigator, organizer, and mentor to the students.

In 2014, the program really picked up steam. Scott and his colleagues scrutinized 70 applications for 13 spots. They didn’t select just “A” students who already knew they were going into the field, but also “B” students who showed curiosity in the field.  “This experience [PRECIP] could be the turning point for these students,” said Scott. These are the students who get a taste of the work, get hooked and follow that path into college.

PRECIP is unique because it gives the opportunity to students like me to work in an interdisciplinary field full of diversity, where individuals from different disciplines work together to make a positive contribution to the scientific community. It was valuable because it helped me set my goals and was a decisive factor in my professional aspirations. Thanks to PRECIP I am determined that I want to become an atmospheric science researcher.

Past student research projects have ranged from working on influences of climate change on tornado occurrence to developing upgrades to the NCAR snow machine. Some of the other exciting areas of research include understanding a rapidly changing climate and its impact on the Earth and its inhabitants, severe weather events such as hurricanes and tornadoes, atmospheric chemistry measurements and aviation weather.  Some of the students continued working on their research back at school, allowing them a more in-depth experience.

Getting students involved in the atmospheric sciences has certainly influenced many of their decisions on what to study in college. While the pre-college program can only reach a handful of students each summer, a goal is to involve high school teachers in the process, to get even more bang for the buck. This would allow the students to continue to work on science-related projects, but would also allow the teachers access to see how real science projects are conducted in a lab setting and take that knowledge back to the classroom.

Laura Curtis is a writer for NCAR's Research Applications Laboratory