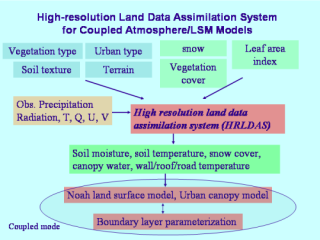 The High-Resolution Land Data Assimilation System (HRLDAS) is an offline driver of the land surface models present in the Weather Research and Forecasting (WRF) model.

HRLDAS uses a combination of observed and analyzed meterological forcing (precipitation, solar and longwave radiation, and surface wind, moisture, temperature) to drive a land-surface model to simulate the evolution of land surface states (e.g., soil moisture and temperature, snow, etc.). The system has been developed to run over WRF domains or over one or more site locations.

The advantage of using HRLDAS as a pre-processor to a WRF simulation is that although the important role of soil moisture in the development of deep-convection has been recognized, it remains the most difficult variable to obtain because there is no routine high-resolution observation of soil moisture at the continental scale. HRLDAS has been developed to fill this gap in the WRF coupled modeling system. 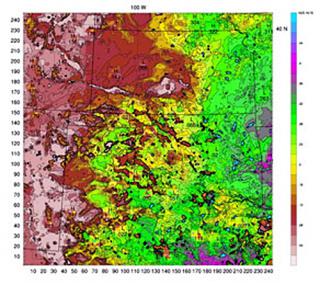