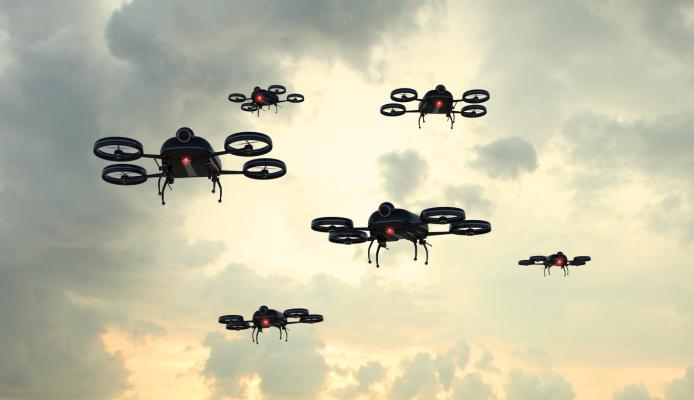 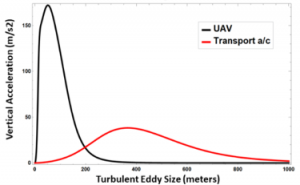 The age of uncrewed systems is upon us, both in the skies and on our highways! The number of small (weighing between 0.55 and 55 lbs) commercial Uncrewed Aircraft Systems (UAS)operating over the U.S. is expected to increase exponentially with time, potentially exceeding 1.6 million by 2021. The Federal Aviation Administration (FAA), NASA, NCAR, and industry leaders are working toward enabling the safe integration of UAS into the National Airspace (NAS) in support of developing a UAS Traffic Management (UTM) system. A key component of integrating UAS into the NAS is to demonstrate their safe flight in the presence of hazardous weather conditions. To meet this goal, NCAR is coupling the latest weather technologies with new algorithms that translate detailed weather information into UAS-specific performance impacts. These new systems can be tailored for specific UAS applications to aid in both flight planning and in-flight decision making.

Figure 2. Predicted wind speed (overlaid on terrain height) and (right) turbulence over the Saguache River Canyon in the northwestern portion  of the San Luis Valley during the transition from stable to convective boundary layer on a clear, weakly forced weather day in July 2017. Obtained with 100 m grid spacing meso-to-microscale model simulation. 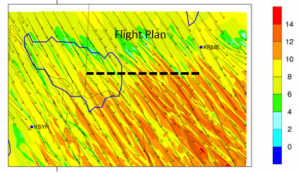 Figure 3. Planned flight path overlaid on wind speed (m s-1) and direction (arrows) obtained for inner grid of meso-to-micro model with 100 grid spacing and (right) movie of expected winds and turbulence along flight path with an assessment of predicted battery life for a standard small  UAS using  a set of 8 standard LiPo batteries (5870 mAh). Orange segments indicate times when turbulence results in excessive battery drain. Current position of UAS on the transect is denoted by the red triangles indicating the expected wind/turbulence and remaining battery charge.

Because of their light weight, slower air speed and limited endurance, most small UAS are much more susceptible to variations in wind speed/direction and turbulence occurring on much finer scales than that impacting commercial aircraft (FIG 1). Sudden changes in wind speed and direction can render small UAS unrecoverable if the resulting head winds exceed performance characteristics. At the same time, UAS trying to maintain level/smooth flight in areas of more intense turbulence can run out of power more quickly than anticipated.  In an attempt to mitigate these operational constraints, NCAR has developed a fine-scale realtime modeling capability that can be used to provide guidance on fine-scale variability of winds,  as well as the location, intensity and duration of turbulence  hazards as shown in FIG2. This new capability will be demonstrated during ISARRA (International Society for Atmospheric Research using Remotely-piloted Aircraft) Flight Week in July 2018 (NCAR UAS Weather Display). Wind and turbulence data collected during coordinated flight missions will be used to evaluate and improve the model.

Finally, translation models are being developed to assess the impact of forecasted winds and turbulence along a user-define flight path on battery usage (FIG 3). The movie shown in Figure 3 demonstrates how wind speed and turbulence along the planned trajectory are expected to change during the planned flight period. It also provides a prediction on how the battery will be depleted. The aircraft position is depicted with a red triangle. It indicates the position of the aircraft  at 1 min increments along the planned flight path along with the expected wind speed and turbulence. The ground speed of the UAS is computed by factoring in the predicted head wind along the planned flight path. The outbound leg takes 3X longer to complete than the inbound leg due to the forecasted headwinds. In addition, sporadic episodes of more intense turbulence along both legs result in an additional drain on the battery. This information can be used by operators for flight planning and UTM to determine routing structures and UAS spacing along flight routes.