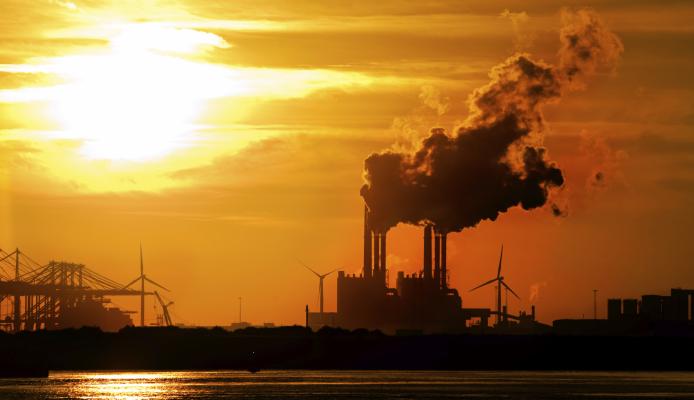 Demonstration of the DTRA SDF prototype algorithm. The left panel depicts the true material release location (Truth) and associated sensor readings (colored dots), compared to the predicted release location (STE) and hazard prediction (colored contours) from the SDF algorithm. The right panel compares the observed (Truth) and predicted (STE) sensor measurements for each sensor number. As shown, the algorithm is attempting to minimize the differences between the sensor observations and the model predictions, by iterating through different model solutions.

Chemical, Biological (CB), and meteorological sensor systems are being deployed across the globe to protect facilities and personnel against hazardous material released into the atmosphere, both accidentally and intentionally. In the event of a CB agent detection, various questions must be quickly answered, to provide a timely warning to those potentially impacted. These include:

Unfortunately, information from individual sensors, by themselves, will likely not be sufficient to answer these critical questions. Therefore, the information from all available sensors must be intelligently fused and analyzed to provide a more complete situational picture. Although subjective analysis can be performed by a trained specialist, the time needed to perform the analysis and the potential analysis errors could be unacceptably large. An alternative approach is to develop objective data analysis techniques, which can be performed much more efficiently by a computer system.

This concept of objective analysis is certainly not new to the meteorological community. Objective data analysis and assimilation techniques have been continually developed and improved over the past 50 years, with the primary objective of improving weather–forecast skill. During this time, NCAR has been and continues to be one of the leading contributors to this field of research and development.

NSAP is employing this experience to the CB-hazard prediction problem to:

An example of this technology, currently being developed for DTRA, is shown in the above figure. This project is utilizing variational data–assimilation techniques and CB–sensor data to provide an estimate of the hazardous–release source characteristics and a refined downwind hazard prediction. The variational technique attempts to minimize the difference between the CB sensor observations and the model predictions, by iterating on the model solution using different initial conditions. It is hoped that this technique will eventually be integrated into operational hazard prediction models such as the Department of Defense's Joint Effects Model (JEM). 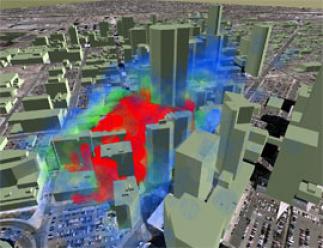 A simulated plume of hazardous material hypothetically released into the atmosphere in Denver, Colorado about five minutes before the time of the image. Building–aware winds were calculated using a large–scale wind as input to the LANL QUIC–URB software package. The transport and diffusion of the plume were calculated by LANL's QUIC–PLUME software. The opaque red color indicates the highest concentrations, and the translucent green and blue show lesser values.

Atmospheric Transport and Dispersion (AT&D) models are utilized for a variety of purposes, including regulatory air quality impact analyses, volcanic–ash–cloud transport prediction, emergency management planning, operational emergency response, and strategic military WMD counter–proliferation efforts. A key ingredient to AT&D modeling is the accurate description and representation of the ambient atmospheric conditions, which drive both the transport speed and the resulting dispersion rates of the airborne material. Although operational atmospheric observation networks can be used, most are unable to resolve the spatial and temporal scales of motion that are essential to AT&D processes. Atmospheric models, combined with these observation networks, can therefore be used to provide a more complete depiction of the driving atmospheric conditions.