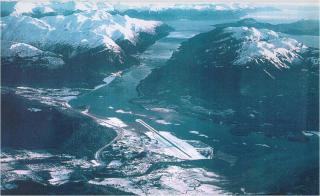 The above photo shows the Juneau International Airport and Gastineau Channel. The patches of churning water seen in multiple areas of the channel give an indication of the strength of the northerly wind conditions and turbulence that planes can expect to encounter when flying along the waterway. (Photo credit: John "Jack" Hermle).

Forget the stunning in-flight views of rugged mountains and nearby ocean. What proves more memorable to many pilots and passengers flying into Juneau's International Airport is the turbulence felt during approach and departure. Pilots landing and departing from Juneau, Alaska face some of the nation's most challenging navigational conditions, and the airport has a history of turbulence-related incidents involving passenger jets. In the aftermath of a 737 aircraft nearly being lost upon encountering severe turbulence, the Federal Aviation Administration (FAA) imposed restrictive rules of operation that were to be maintained until a new warning system could be developed for the airport. 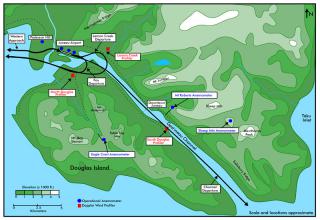 Juneau's turbulence issues largely stem from the effects of surrounding mountainous terrain on wind-flow patterns. The airport's single runway sits at the end of the Gastineau Channel. Surrounded by steeply rising mountains, winds streaming into and over the narrow channel tend to be complex. JAWS Prototype graphical display. Click to enlarge. JAWS Prototype graphical display. Under certain conditions, the combination of wind speed and direction means that turbulence is too strong for commercial jets to land or take off from Juneau. 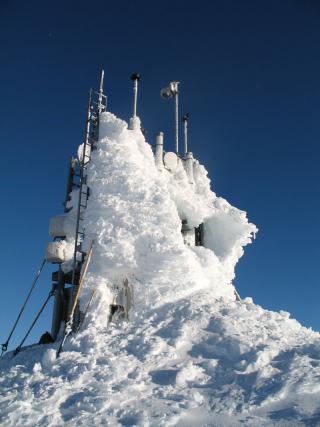 Sheep Mountain tower is one of the mountaintop sites that collects wind and temperature information that is used to decide whether turbulence is present in the area. As can be noted from the rime ice accumulation on the tower, operation and maintenance of the JAWS system is often challenging because of harsh environmental conditions. To better warn pilots of potentially dangerous turbulence, the FAA and Juneau airport officials turned to NCAR's Research Applications Laboratory (RAL) for a solution. RAL scientists had previously designed the software used in the turbulence alerting system developed for Hong Kong's International Airport, which has turbulence issues similar to Juneau's. The FAA asked RAL scientists to create a similar, prototype system for Juneau.

Juneau has two strong wind regimes — one stemming from the north, the other from the southeast. Northerly winds are generated by pressure and/or temperature gradients between the Canadian interior and Alaska's southeast coastal regions. The southeasterly winds tend to be most prevalent and also the most problematic for the area. Southeasterly winds spawn from a variety of sources. Low pressure systems that generate storms in the Gulf of Alaska are often drivers of these winds. In addition, surface-level winds coursing up the Inland Passage can gain considerable steam because of funneling effects, while winds aloft often end up swinging in a southerly or southwesterly direction.

Because the airport provides the only non-waterway entry into and out of the city, air traffic tends to be heavy, averaging more than 400 flights daily. Additionally, with the city's economy largely tied to tourism, government-related work, and retail sales, safe, reliable air transit is critical. However, the northerly and southeasterly wind regimes led to enough passenger jet and private aircraft turbulence-related incidents that Mark Air and Delta Airlines stopped serving Juneau. Alaska Airlines remains as the only commercial air carrier serving the city. 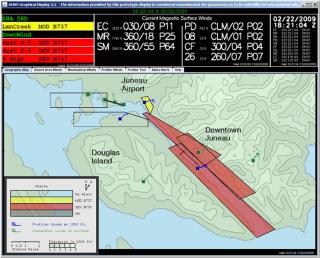 Unlike the Hong Kong project, in which RAL provided only the alert-system software, the plan for Juneau included responsibilities for creating the prototype in its entirety. This expanded role meant that the team would have to identify best placement of weather profiling stations in order to pinpoint areas of greatest turbulence, then design, build and maintain the sensor sites that provided information about wind speed, wind direction, air temperature, etc. Initially, RAL purchased equipment that Alaska Airlines installed and used to enhance flight safety. Then, from this initial equipment suite, RAL expanded monitoring to include additional sites and new types of hardware, including wind profilers.

Today, five anemometer sites and three wind profiler sites supply data to the prototype Juneau Airport Winds System (JAWS). Each site is found at a strategically located position to capture critical information on the northerly and southeasterly wind regimes from surface level to 6,000 feet. Data is fed from these sites to a central location at the airport where it is processed and alert information is generated.

The weather sensors at each site route data through a network of wireless radios and telephone lines. Using this information, JAWS generates turbulence alerts every minute for hazardous areas in the vicinity of the airport. These alerts give pilots real-time information about wind speed, wind direction, and an indication of overall flight safety. While the output is designed for use by pilots flying 737 jets, the color-coded alerts (yellow for moderate, and red for severe) are useful to pilots of smaller planes who can assess flight safety level based on how their aircraft compares to a 737's size and capabilities.

Begun in 1997, JAWS evolved greatly over the past decade, steadily improving and refining system capabilities with the goals of increased flight operational safety and alert system availability, meeting the needs of pilots, flight service specialists, and the flying public, and ensuring that a repeat of past significant encounters with turbulence no longer occur. By FY2007 a JAWS prototype, tested and validated by the FAA, was operating with alerts. Shortly thereafter the FAA commenced development of its own "end-state" (JAWS-E) version of the system. The FAA development strategy included incorporation of NCAR's algorithms, display technology, and most remote site hardware. In FY2010 maintenance of the mountaintop sites transitioned to the FAA, followed by wind profiler site maintenance in FY2011. In early FY2012 the FAA commenced an Operational Readiness Demonstration of their system, following which they commenced formal operation of JAWS-E. At this time parallel operation of the NCAR prototype ceased, the prototype was shut down and dismantled. Formal commissioning of the JAWS-E occurs in July 2012, following which Alaska Airlines, the only part 121 commercial carrier operating in Juneau, will change their Operations Specification to use JAWS alerts for making go/no go decisions at the Juneau International Airport.

Now that the JAWS program is completed, consideration could be focused on using JAWS-like systems at airports around the United States experiencing similar terrain–influenced turbulence. Pilots flying into and out of airports located in Maui, Reno, and Las Vegas, and other sites in Alaska, for example, could benefit from JAWS technology, and new prototypes would benefit from lessons learned during the Juneau alert system's development and maintenance.