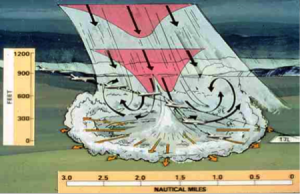 Artist rendition of a microburst and its effect on a landing aircraft.

This Phase–1 LLWAS was very simple. It compared a center field wind to 5 other sensors around the airport. When there was a 15–knot vector difference, it would flash the wind data to the air traffic controller and the controller would read the raw winds, e.g., 120/35 (120 degrees at 35 knots), 110/20, 350/15, etc. from each sensor to the pilot landing or about to take off and the pilot had to do the vector addition in his head to determine the headwind/tailwind components.

This simple system worked for large scale weather features, but it also had a serious false alarm problem and the sensors were too far apart to capture small, but intense windshear events important to aircraft. Also, the center field wind could be variable and this would trigger windshear alarms at all the outer sensors since all the other sensor winds were compared to center field. Research conducted at the National Center for Atmospheric Research (NCAR) in the 1980s indicated that microburst windshear was very dangerous to aircraft below 1000 ft. Several major accidents during the 1980s also implicated windshear as a factor.

In 1983, the FAA asked NCAR to develop a version of LLWAS that could detect microbursts. Between 1983 and 1988, NCAR developed and tested a new LLWAS system, called enhanced LLWAS or LLWAS–Network Expansion that detected microbursts, determined the strength in terms of headwind/tailwind gains or losses (in knots) and located the event (on the runway, at 1, 2, or 3 nm on departure or arrival). The system was designed to provide alerts specific to each runway operation. It was designed to have a probability of detection of 90 percent or greater and a false alarm rate of 10 percent or less.

This system was later improved and is now called the Phase–3 LLWAS. A typical Phase–3 LLWAS will have enough sensors to be spaced 2–km apart (∼1 nm apart) and cover out to 2 nm from the end of each major runway. The largest LLWAS is at Denver International Airport. It has 32 wind sensors. Most Phase–3 systems have between 12 and 16 wind sensors. A siting evaluation is done for each airport to determine the network geometry since it depends on terrain, # of runways, obstructions, etc.

The Phase–3 LLWAS alert information is described here. If a pilot is landing on runway 08, and there is a microburst on his path, the controller would have a display that reads: 08A MBA 30K–3MF 350/25. This is read to a pilot arriving on runway 08 (08A) by a final controller as "microburst alert (MBA), expect a thirty knot loss (30K–) at three miles final (3MF), threshold wind three–five–zero at 25 (knots)".

If there was a wind shear with a wind speed gain at 1 mile departure (headwind gain), for a pilot departing runway 25 left, the final controller's LLWAS display would show: 25LD WSA 15k+ 1MD. This would be read as "winds hear alert, expect a fifteen knot gain at one mile departure". There are Phase–3 LLWAS systems at 9 US airports and Phase 2 LLWAS at more than 100 airports. Taiwan, Korea, Singapore, Saudi Arabia, and Kuwait are now implementing LLWAS Phase–3 systems. Note, the FAA also has Terminal Doppler Weather Radars for wind shear detection at 45 airports and has ASR–9 based wind shear detection systems at another 37 airports. The FAA originally had 110 Phase–1 LLWAS systems, which were upgraded to Phase–2 systems.

A Phase–2 LLWAS has the same number of sensors (5–6) as a Phase–1 system (described above), but the wind shear algorithm was upgraded to significantly decrease the number of false alarms. As mentioned above, a Phase–1 or Phase–2 LLWAS was not designed to detect microbursts per se, but if the flow is large and strong, it may alert.

When NCAR developed the Phase–3 LLWAS, it gave the specifications to the FAA. The University Corporation for Atmospheric Research Foundation (UCARF),  owned the intellectual property for the wind shear algorithm during the lifetime of the patent. A license agreement was required for companies to implement LLWAS technology until early 2013 when the patent exclusion expired. A license from UCARF is no longer required to utilize the LLWAS algorithm. The UCARF does however, provide technical materials such as test datasets, test airport configuration files, test alert outputs, etc. to aid companies in the implementation and testing of the LLWAS Phase-3 algorithm.

A. A typical Phase–3 LLWAS system includes a network of anemometers (wind sensors) atop tall poles located around the airport (a.k.a. remote stations) out to no more than 3 nm from the end of the runways, a master station that processes system data and communicates with the remote stations, an archiving system, operator console, alphanumeric alarm displays, and in some instances graphical displays.

Q. How does it work?

A. The wind data at each remote station is processed every 10 seconds to determine if there is divergence or convergence within the network, or station–to–station wind differences between stations aligned with the runways. The divergence/convergence information is processed and if the intensity of the event is large enough, the system will calculate the strength of the along–runway wind losses or gains and generate windshear or microburst alerts (depending on strength), and identify the location of the event.

Q. What is a microburst?

A. A microburst is an intense windshear. By definition: Microburst n: A small, very intense downdraft that descends to the ground resulting in a strong wind divergence. The size of the event is typically less than 4 kilometers across. Microbursts are capable of producing winds of more than 100 mph causing significant damage. The life span of a microburst is around 5–15 minutes.

A. Microbursts are strong windshears (greater than 30–knot winds speed losses over distances of 1–4 km) that are primarily generated by evaporative cooling and rain loading. When precipitation (rain or snow) descends below cloud base or is mixed with dry air, it begins to evaporate and this evaporation process cools the air. The cool air descends and accelerates as it approaches the ground. When the cool air approaches the ground, it spreads out in all directions and this divergence of the wind is the signature of the microburst. In humid climates, microbursts can also generate from heavy precipitation. The weight and drag associated with the falling precipitation can result in a downdraft that will descend to the ground and spread out.

Q. Why is it a problem for airplanes?

A. Windshear is a rapid change of wind speed or direction over a short distance. In general, windshear becomes a hazard for aircraft if the wind changes more than 20 knots over a distance of 1–4 km (0.5 to 2.5 nm). On either takeoff or landing, aircraft are near stall speeds. When going through a windshear, the headwind decreases resulting in a loss of lift. If the aircraft is near stall, then a little loss of lift can make all the difference to whether the aircraft can continue the flight.

Q. How and what kind of decisions do airports or airlines make using LLWAS?

A. LLWAS provides information on windshear type, location, and intensity. Windshear alerts are issued via radio to arriving and departing aircraft by final air traffic controllers. In the U.S., most airlines require that pilots not continue their arrival or departure if there is a microburst alert valid for their operation. Although most aviation authorities do not close the runways when microbursts are occurring, the air traffic controllers will work with the pilots to reroute aircraft away from the event to a runway that is not impacted by the windshear.

Q. How and what kind of decisions do airports make using LLWAS?

A. LLWAS provides information on windshear type, location, and intensity. The pilots get the alert from the controller and the pilot is supposed to determine if they feel comfortable continuing the operation. In the U.S., airlines require that pilots do not continue if there is a microburst alert.

Q. Where have LLWAS systems been implemented?

A. Phase–3 LLWAS systems have been implemented throughout the U.S.A. and at numerous international airports including, but not limited to Taiwan, Korea, Saudi Arabia, Hong Kong, Kuwait, Italy, Singapore, and Spain. Additional LLWAS procurements are in progress.

Q. What are some of the windshear problems associated with airports? 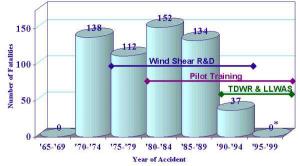 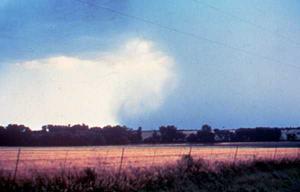 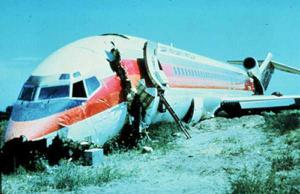 Airplane crash due to windshear 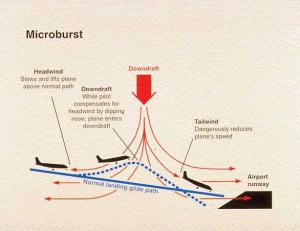 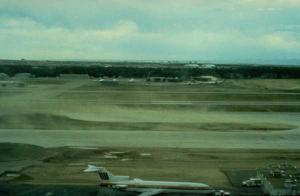 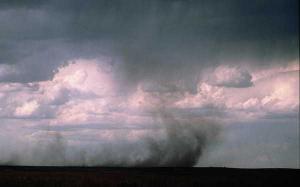 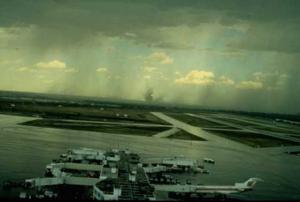 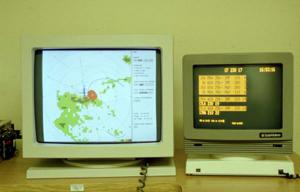 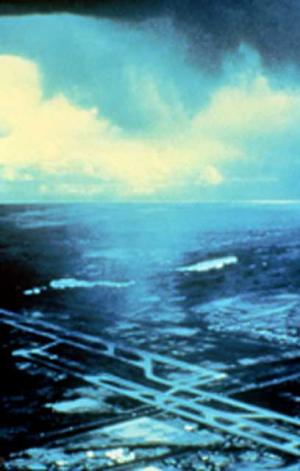 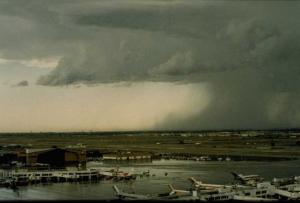 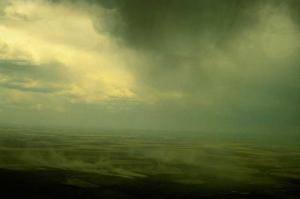 Microburst from air (a) 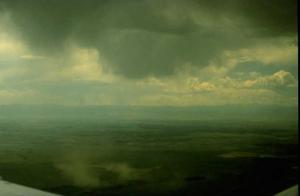 Microburst from air (b) 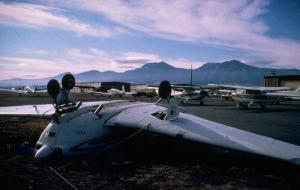 Between 1996 and early 2013, the LLWAS Phase-3 wind shear detection algorithm was only available through a license agreement with University Corporation for Atmospheric Research Foundation (UCARF). Over this period, a number of different companies licensed this technology, and developed and implemented the Phase-3 LLWAS systems worldwide.

With the expiration of the UCAR Foundation's patent protection for the Phase-3 LLWAS wind shear detection algorithm, a license from the UCARF is no longer required to utilize this core LLWAS algorithm. The UCARF does, however, provide technical materials such as test datasets, test airport configuration files, test alert outputs, etc. to aid companies in the implementation and testing of the LLWSA Phase-3 algorithm. Current LLWAS System Providers include*:

(In order of license date)

DTN is a leading provider of weather services in the USA and weather observation systems worldwide, through its acquisition of Telvent, DTN and Almos Systems. Schneider is actively supporting LLWAS systems at several international airports, including provision of new systems and extending and upgrading existing systems in line with airport expansions and increasing air traffic.

Vaisala Airports supports the safety and efficiency of airports and air traffic worldwide, by offering products and services to reliably monitor the surrounding weather conditions. Vaisala’s solutions are compliant with ICAO and FAA requirements. With a Vaisala AviMet® Low-Level Wind Shear Alert System (LLWAS), ATC personnel can warn pilots when low-level wind shear penetrates the runway corridors so they can take appropriate evasive action. The LLWAS can be easily upgraded to a full-scale AviMet AWOS system or it can also be fully integrated into an existing AviMet® AWOS.

Vitrociset is based in Italy. The System SAAW from VITROCISET is currently the only system in Italy pertaining to class LLWAS III comparable to the the FAA system. The system detects the presence of windshear in an airport area with a relative signalling dall.allarme in real time.

LEONARDO Germany GmbH is a leading provider of weather radar systems and integrated system solutions. Based in Germany, LEONARDO Germany GmbH relies on fifty years of experience in the design, manufacture, sales and service of meteorological systems and has a wide base of satisfied international customers from the aviation and meteorology sectors. Integrated wind shear detection systems based on LLWAS (FAA compliant, also in combination with AWOS), polarimetric X/C/S-band radar, and Doppler lidar were added to the product line in 2009.

All Weather, Inc. is a leading international developer of surface and aviation weather measurement systems and air traffic management solutions

MicroStep-MIS specializes in the development and manufacturing of aviation, meteorological, and information systems. Our activities cover the complete range of software and hardware development and integration. Our products and services comply fully with ISO, ICAO, WMO, and EUROCAE technical and quality standards.