A collaborative effort among NCAR, NCEP, NASA, and university groups has been established to develop and improve the community Noah-MP LSM, which is a critical component in the operational National Water Model (NWM) and RAL/HAP WRF convection-permitting climate modeling efforts. To enhance its global applicability, the Noah-MP model was evaluated using snow and surface-heat-flux observations obtained from the Colorado Headwaters, Tibetan Plateau in China (Gao et al. 2015), and Boreal Ecosystem Research and Monitoring Sites (BERMS) in Canada (Chen et al. 2015). Based on these evaluations, numerous Noah-MP physics parameterizations have been improved such as canopy snow interception and sublimation for forested regions. New parameterizations of organic soil (Chen et al. 2016), sparse vegetation rhizosphere (Gao et al. 2015), simple nitrogen dynamics (Cai et al. 2016), and a dynamic crop-growth model (Liu et al. 2016) have been introduced to Noah-MP and evaluated against field observations. 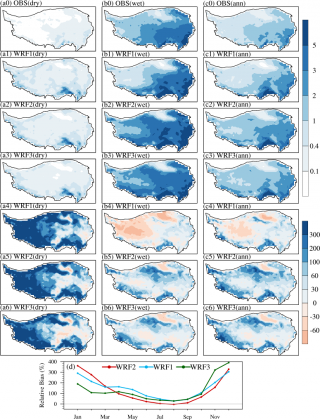 Dynamical Downscaling Modeling (DDM) is important to understanding regional climate change and developing local mitigation strategies. The accuracy of DDM depends on the physical processes involved in the regional climate model as well as the forcing datasets derived from global models. We investigated the relative role of LSM and forcing datasets in the DDM over the Tibet Plateau (TP), a region complex in topography and vulnerable to climate change. Three WRF dynamical downscaling simulations configured with two land surface schemes (Noah versus Noah-MP) and two forcing datasets (CCSM vs ERA-Interim) were performed for the 1980 to 2005 period. The downscaled temperature and precipitation were evaluated with observations and inter-compared regarding temporal trends, spatial distributions, and climatology. Results show that the temporal trends of the temperature and precipitation are determined by the forcing datasets, and the forcing dataset with the smallest trend bias performs the best. Relative to the forcing datasets, land surface processes play a more critical role in the DDM over the TP due to the strong heating effects on the atmospheric circulation from a vast area at exceptionally high elevations (Figure). By changing the vertical profiles of temperature in the atmosphere and the horizontal patterns of moisture advection during the monsoon seasons, the land surface schemes significantly regulate the downscaled temperature and precipitation in terms of climatology and spatial patterns (Gao et al. 2016). This study emphasizes that the selection of land surface schemes is of crucial importance in the successful DDM over the TP.

The Noah-MP model can be executed by prescribing both the horizontal and vertical density of vegetation using either ground- or satellite-based observations. Another available option is for prognostic vegetation growth that combines a Ball-Berry photosynthesis-based stomatal resistance (Ball et al., 1987) with a dynamic vegetation model (Dickinson et al. 1998) that allocates carbon to various parts of vegetation (leaf, stem, wood and root) and soil carbon pools (fast and slow). The model is capable of distinguishing between C3 and C4 photosynthesis pathways and defines vegetation-specific parameters for plant photosynthesis and respiration.

Download the most recent Noah-MP code (versions newer than V1.6)

Comparisons of Noah-MP versions: Results from the simple 1D drivers for Bondville.

Comparisons of Noah-MP to Noah: Results from the simple 1D drivers for Bondville.