The WRF-WxMod® model is a novel capability  for evaluating the impacts of cloud seeding on precipitation, designing new or optimizing existing cloud-seeding programs, and/or forecasting cloud-seeding opportunities when run in a real-time forecast mode.  WRF-WxMod uses a new silver iodide (AgI) cloud-seeding parameterization to simulate the physical effects of AgI nucleation into ice, and growth into snow.  Running two simulations of WRF-WxMod --one in which seeding is simulated and a “control simulation” without seeding--and then assessing the difference between the two simulations, provides a controlled way to evaluate the impacts of cloud seeding. For example, the difference in precipitation from the seeded simulation compared against the control simulation, is interpreted as the simulated seeding effect on precipitation.  This method not only provides an estimate of the amount of precipitation change, but also a spatial map of where the changes occurred.

WRF-WxMod predicts the AgI nucleation ability of four ice-nucleation modes (deposition, condensation freezing, contact freezing, and immersion freezing) as functions of temperature, saturation ratios with respect to ice and water, and scavenging of AgI particles by drops and ice crystals following DeMott (1995) and Meyers et al. (1995). The collection of AgI particles by drops and ice through Brownian diffusion, turbulent diffusion, and phoretic effects, are parameterized following Caro et al. (2004). In addition to scavenging processes, AgI particles can activate cloud droplets as CCN as they contain a salt complex. The fraction of AgI acting as CCN is a function of a water supersaturation ratio. A point source of AgI particles is described by a release rate in kilograms per second and a grid point that indicates the source location. The locations can be fixed points to represent ground-based generators, or they can dynamically change during simulation to represent a seeding aircraft. The AgI particles are assumed to have a single mode lognormal size distribution. The mean diameter and the geometric standard deviation can be prescribed to match the laboratory measurements of the AgI solution. By tracking the conserved AgI number and mass within different hydrometeors, AgI “precipitation” (wet deposition) is also calculated. The cloud-seeding modeling framework has been used to investigate the microphysical chain of events of glaciogenic seeding and its effect on wintertime orographic clouds under both idealized and realistic conditions (Xue et al. 2013a,b, 2014, 2016, 2017). The results indicate that the cloud-seeding parameterization can physically simulate the processes associated with seeding events. 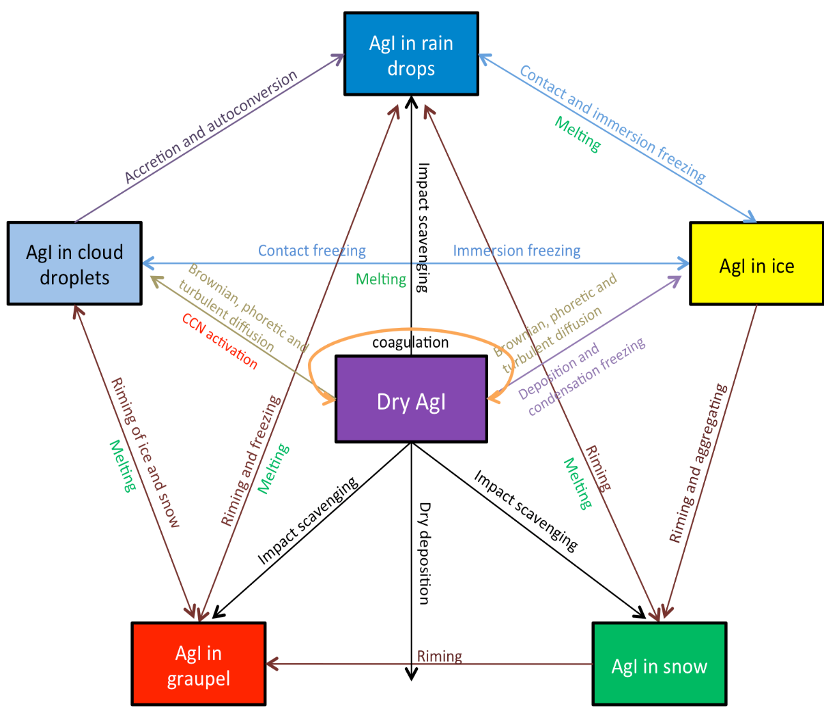 Figure 1. Schematic of the AgI–cloud interactions that are simulated in the seeding parameterization.

Recently, this AgI cloud-seeding parameterization has been coupled into a mixed-phase bin microphysics scheme (Geresdi et al. 2017, 2020). Using bulk microphysics schemes only, the total mass and/or number mixing ratios of different hydrometeor species are predicted. The size distribution of each species is often parameterized by prescribed functions. Unlike the bulk approach, the bin microphysics divides hydrometeors into many discrete diameter or mass bins and predicts the mass and/or number mixing ratios for each bin. Because size distributions of hydrometeor species are not prescribed, the cloud can evolve and respond to AgI seeding in a more physically realistic way in the bin scheme. Another advantage of a bin scheme is that the simulated results can be directly compared to the in-situ observed size distributions. Therefore, careful evaluations of the seeding simulations using the bin scheme with detailed field observations and/or laboratory data are needed so the bin scheme can improve the more computationally efficient bulk-seeding microphysics scheme.