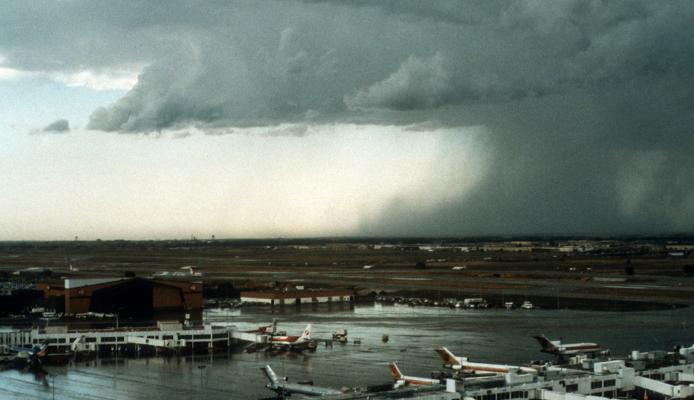 Low-level wind shear has been identified as a cause or contributing factor in a significant number of aviation accidents. Since 1943, wind shear accidents are estimated to have been responsible for more than 1400 fatalities worldwide, including over 400 deaths in the United States during the 1973-1985 period. Research in the late nineteen seventies through the early nineteen nineties, revealed that an intense localized weather phenomenon called a microburst is the most hazardous type of wind shear. A microburst is characterized by precipitation falling below cloud base, a descending shaft of air, and an intense divergence of the horizontal wind field at the surface. The diverging pattern of the wind field is particularly hazardous since an aircraft encountering the microburst will initially experience a strong headwind, quickly followed by a tailwind with its associated loss of lift. The significance of the hazard, and number of lives lost, led to the development and deployment of a number of wind shear and microburst detection systems.

Several different commercial off-the-shelf technologies are used around the world for wind shear detection. These include:

While there are a number of commercial wind shear and turbulence detection technologies available today, it is essential to understand exactly what is happening meteorologically at an airport before selecting and installing wind shear detection equipment as each system has special capabilities and limitations.

Commercial versions of four of the systems above have been specifically designed to alert air traffic control tower controllers to specific wind shear conditions based on the Federal Aviation Administration (FAA) wind shear detection system alerting strategy, as implemented by the FAA’s Terminal Doppler Weather Radar (TDWR) and LLWAS. The sensing systems that are ‘compliant’ with the automatic alerting strategy of the FAA systems include the TWDR, LLWAS, Doppler Weather Radar (specific manufacturers), and Doppler Lidar (specific manufactures).

Doppler lidars can observe wind patterns in clear air, but are not effective in low visibility conditions (e.g., low clouds and fog) and during precipitation. Lidars are very effective in measuring clear-air wind features and hence are used by themselves or in combination with other sensors to measure clear air terrain-induced wind shear and turbulence.

Winds that vary with altitude can be monitored effectively with a microwave wind profiler and/or sodar, but these systems are vertically pointing devices with comparatively long averaging times and rather slow update rates that aren’t appropriate for monitoring the rapidly changing horizontal wind patterns associated with gust fronts and microbursts.

While virtually all microbursts appear to be initiated by convective activity and precipitation, wind shear can still be a serious hazard without major thunderstorms and without precipitation reaching the ground. This type of wind shear event is often called a ‘dry’ microburst. Dry microbursts can be just as strong as convectively induced microbursts with precipitation and they can be more dangerous because there are fewer visual clues of the wind shear for pilots.

NCAR’s Research Applications Laboratory (RAL) has over thirty years of experience in system development and technology transfer. NCAR/RAL has successfully developed and transferred to operations weather decision support technologies to the aviation community around the world.