The Dynamic Integrated foreCast (DICast®) system is tasked with ingesting meteorological data (observations, models, statistical data, climate data, etc.) and producing meteorological forecasts at user defined forecast sites and forecast lead times. In order to achieve this goal, DICast® generates independent forecasts from each of the data sources using a variety of forecasting techniques. A single consensus forecast from the set of individual forecasts is generated at each user-defined forecast site based on a processing method that takes into account the recent skill of each forecast module.

The DICast® system was first developed at NCAR in the Fall of 1998 with the goal of generating completely automated, timely, accurate forecasts out to ten days at thousands of international locations. Potential applications of this system include the transportation systems, precision agriculture, and general public-oriented forecasts. See the Operations tab for other future applications of this technology.

The DICast® system ingests data from multiple sources and applies automated forecasting techniques to each data source. Each of these forecast modules produces an "independent" forecast. The forecast skill is then improved using a fuzzy logic scheme to combine the individual forecasts.

Over the years, the numerical weather prediction (NWP) model data used by the system has evolved in response to changes to those models and appearance of new ones. The system is currently capable of using all of the US National Weather Service (NWS) modeling suite (GFS, NAM, RAP, HRRR, ensembles of GFS and CMC) as well as MOS guidance (MEX, MET, MAV, LAMP), European Forecast Center's ECMWF, the UKMET model, Environment Canada's GEM model and the Australian Bureau of Meteorology's ACCESS model. Other models such as high-resolution customized versions of WRF can be added based on the user requirements.

The system is designed to generate forecasts of standard meteorological parameters at a set of user configured locations for each forecast lead time. Forecast extent, forecast interval and update frequency are configurable but generally match the input NWP model temporal parameters. Individual module forecasts are combined using a weighted sum. The weights used in the combination are adjusted daily to reflect the recent performance of the forecast modules.

The DICast® system is in a continuous state of development so that it can adapt to new and changing data sources as well as utilize new algorithms. Some of the currently planned major additions include: 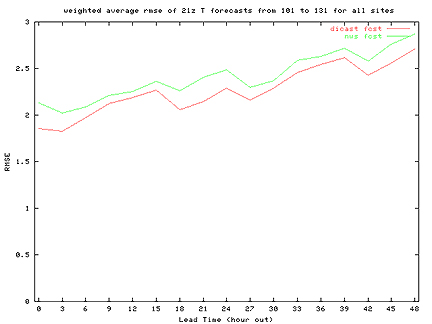 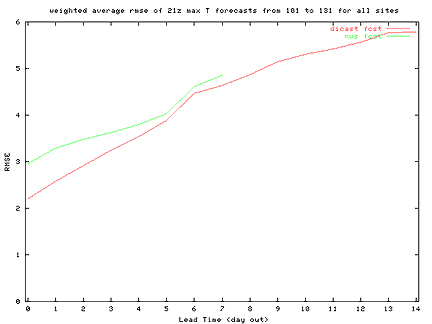 The DICast® system generates point forecasts for user–defined locations (e.g., cities, at observation sites, locations along the highway system, agricultural fields, etc.). At observational sites, forecast parameter tuning based on past performance helps improve the forecasts. This class of sites is called core forecast sites. Forecasts at non–core sites are derived from forecasts at core sites.

The numerical weather model data used by DICast® has three–hourly resolution. Since the system is primarily model data driven, forecasts are initially generated at three–hour intervals. These times are called the core forecast lead times.

DICast® creates several independent forecast estimates. Each forecast module attempts to create the best forecast it can by applying a specific forecast technique to its input data set. Each DICast® forecast module uses one of three basic techniques to generate forecasts. They are:

The Dynamic MOS (DMOS) forecast modules are a dynamic variation of the traditional NWS MOS procedures. DMOS, like traditional MOS, finds relationships between model output data and observations using linear regression methods. However, while MOS equations are calculated using many years of data, DMOS uses only the last 3 months (configurable) of data. New regression equations are re-calculated once per week.

The DMOS technique has several advantages over traditional MOS. The reliance on only a short history allows DMOS equations to be calculated and DMOS forecasts generated for newly ingested models or models that are changing due to enhancements. Traditional MOS equation generation would require the model to be stable (no changes) for several years. Also, the MOS equations are calculated painstakingly with a large human quality control effort. This makes it difficult to add MOS equations for a new set of forecast sites. DMOS forecasts can be made at these sites immediately provided they have an observational history of at least three months (configurable).

A disadvantage of DMOS is that the equations it produces are less stable than MOS equations. For this reason, quality control checks must be put into place to assure that the equations produced will not create nonsensical outlier forecasts.

The DMOS subsystem applied to any model has three components:

The interaction of these three components is illustrated below:

Since the forecast sites are rarely at model grid points, interpolation techniques are used to generate forecasts at the forecast sites. This requires an understanding of the projection of the model grid and the terrain assumptions used in each model. As some of the regressors are estimates of meteorological variables at the earth's surface, correcting for the simplified terrain used by the model is important and varies from model to model. The regressors from one model run are all stored in one file. The regressor files are put into a regressor history that the DMOS empirics process uses to calculate regression equations.

The DMOS Empirical Relationships Generator attempts to find relationships between the regressors and the observations at forecast sites. It does this using a linear regression technique. There are tradeoffs involved in determining the best regression equation. The goodness of fit measure of a regression equation is called its r–squared value. Typically, adding more regressors to an equation increases the r–squared value. However, this also increases the variance of the output forecasts since more regressors are included that do not have a strong relationship to the predictand. Therefore, the desired set of regressors has most of the information leading to a good prediction and does not contain noisy regressors.

This best combination of regressors will vary from site to site, between forecast lead times, and clearly will be different for each forecast variable. The relationships will also vary from season to season and from model to model. The empirics generator is run once per week for each model to find the equations which best fit the most recent data. These equations are stored in a DMOS empirics file and used later by the DMOS forecast generator.

The DICast® forecast modules each generate as complete a forecast as possible. This includes a forecast for every forecast variable at every forecast site for every forecast lead time. These independent forecast estimates are combined by the integrator to generate one final consensus forecast. Numerous combination techniques have been developed. Investigation has led to a decision to use an enhanced Widrow–Hoff learning method. This method creates its final forecast using a weighted average of the individual module forecasts. The weights are modified daily by nudging the weights in the gradient direction of the error in weight space. The effect of this is that forecast modules that have been performing well for a particular forecast (variable, site, and lead time) get more weight and the poorly performing modules get less weight. Note that different weight vectors exist for every forecast generation time due to differing latencies in the input data sets. The interaction of components of the integrator is illustrated in the figure below. 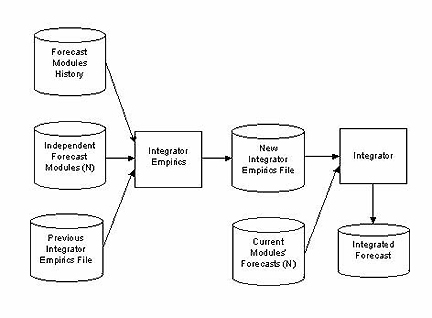 This DICast® process runs once per day and updates all the weights based on the performance of the various forecast modules. It reads the observations from the previous day and compares the forecast modules' output that predicted those observations. For each forecast, the errors are computed and the gradient vector in weight space is computed. A step proportional to the size of the combined error is taken in that gradient direction to compute the new weights.

The DICast® forecasting techniques described above only apply to core forecast variables. These are variables that are regularly measured and reported in meteorological observation data. The DMOS forecast modules and the integrator both require specific observations to tune themselves. The weights used in the combination are pre determined by a meteorologist familiar with the models and stored in a configuration file. The model variables to be combined have been extracted by the DMOS regressor calculation process and stored in a regressor file. The Non–Verifiable Data (NVD) extractor reads in the appropriate models' regressor files along with the weight configuration file before creating its weighted combination output.

The post–processor provides a variety of processing options to merge the integrator's forecasts and the NVD forecasts. It attempts also to remove ridiculous forecasts, derive other forecast variables, and spatially and temporally interpolate the forecasts to non–core forecast sites.

Quality control measures are applied to the integrator's output to ensure that no forecasts are well beyond reasonable ranges. Forecast values near the limits are returned to the bounding values. For example, forecasts of 101% probability of precipitation are turned into forecasts of 100%. Forecasts well beyond the bounds are replaced with a missing data flag.

Forecast variables required by users are derived from the core set of MDSS forecast variables. For example, relative humidity is derived from temperature and dew point temperature. The output of the integrator contains only forecasts for core forecast sites. Forecasts at the non–core sites are generated by spatial interpolation from the core sites' forecasts. Temporal interpolation of the three–hourly forecasts to one hour is used to generate the desired final forecast temporal resolution.