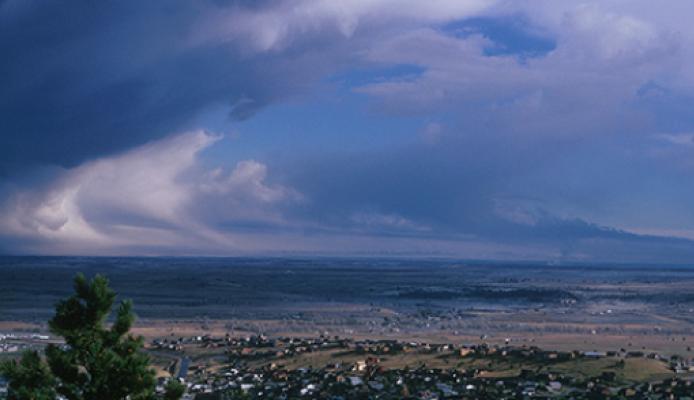 NSAP has developed and deployed very high fidelity, operational, computer–based weather analysis and forecasting systems for many applications worldwide. For example, new weather–prediction systems have brought the Army Test Ranges and Proving Grounds into the 21st century, in terms of weather services. The improved weather information for the Army test planning has saved tax payers millions of dollars. Numerous other domestic projects include providing general weather support for Navy missile launches in California and Hawaii, supporting potential Space Shuttle landings at alternative sites, and forecasting for wind farms. Recently, in collaboration with AirDat LLC, NSAP built a CONUS–scale operational forecasting system that runs with its data–assimilation technology and uses observations from special AirDat weather instruments onboard regional commuter aircraft. Another focuses of such operational systems is on urban areas and urban impacts on the weather.

In contrast to most computer weather forecasting models that don't even recognize the existence of cities in any meaningful way, the NSAP models resolve the large–scale effects of the cities, and some even represent the complex winds in street canyons. In addition to these domestic applications, operational weather systems are being deployed worldwide to support special missions. For example, they have been used by the National Ground Intelligence Center during Operations Enduring Freedom and Iraqi Freedom to assess the consequences of the potential release of hazardous airborne material. Such NSAP–provided computer models have been similarly employed for counter–terrorism support by the Defense Threat Reduction Agency at the Salt Lake City, Athens and Torino Olympics. 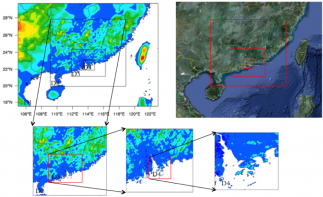 The model domain configuration for real-time high-resolution weather analysis and production of 5-year microclimatology for Shenzhen metropolitan areas. The terrain height is shown in color shades.

The Fourth Assessment Report (AR4) of the Intergovernmental Panel on Climate Change (IPCC) has concluded that global warming is "unequivocal", with discernible changes in ocean temperatures, continental–average temperatures, temperature extremes, and wind patterns, all of which have far reaching socioeconomic and ecologic impacts. Now, more than ever, there is a compelling need for accurate information about the local, regional, and global climate, how it has evolved in the past, how it is likely to change in the future, and how it has and will impact human activities. These impacted activities include agriculture and energy production and consumption (especially renewable energy sources such as solar, wind, and hydropower). Ecological impacts that directly affect humanity include the spread of disease, the reliability of water resources, and the effects on plant and animal life. But before the impacts of future climate change can be understood and assessed, we must understand the climate of the recent past, say within the past 20–40 years.

Many long–term, global gridded reconstructions of observations exist to fill this need, but because of the sheer computational expense associated with creating these datasets, they are typically done on a coarse grid (grid cells that are ∼250 km on a side) with output available only every 6 h. These analyses fail to account for the local influences on weather and climate of small to modest–sized land–surface features and water bodies, and they only marginally represent the effects of the daily heating cycle.

Research in numerical weather prediction covers a wide range of subjects in NSAP, including the representation of urban complexes in models through urban–canopy parameterizations, the development of improved models of boundary–layer processes, the application of ensemble methods to meet operational–prediction needs on the mesoscale, the development of improved data–assimilation methods that can be applied operationally, and the testing of feature–based and user–centric verification methods. And, improved methods are being developed for the use of models for downscaling current and future climates. There is also an emphasis on the use of coupled models, where the output from meteorological models is input to secondary models that are employed for calculating the transport and diffusion of plumes, the propagation of sound and radio waves, and the spread of infectious human and agricultural diseases.