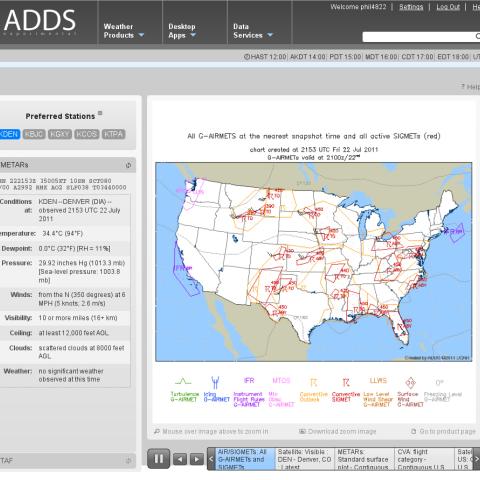 Those who work in the aviation sector require a large amount of information to route, plan, and make decisions about air traffic control, aircraft, and airport operations. The sheer amount of data available to aviation personnel can seem overwhelming, as it includes pilot reports (PIREPS), aviation weather forecasts (TAFs and weather model data), satellite, radar, surface observations (METARs), official advisories, considerations of thunderstorm strength and location, and icing and turbulence information. Viewing each of these data sets from their respective sources can be a daunting and time–consuming task, with the risk of hindering aviation operations. Thankfully, these data have been consolidated into a single website where a large amount of the information required to make air traffic control, aircraft, and airport operation decisions can be found.

This website, called The Aviation Digital Data Service (ADDS, aviationweather.gov/adds), debuted in 1998 and is updated about every year. It was developed by scientists and engineers at the National Center for Atmospheric Research (NCAR) to meet the needs of anyone in the business of ensuring the safety and efficiency of aircraft in the sky and on the ground. ADDS is a collaboration between NCAR and the Aviation Weather Center (AWC).

The Flight Path Tool showcases all of the information listed above in a Java application that quickly launches from the user's desktop. By selecting any path between two points on a map, the user is given a cross section of that trajectory, displaying observations and forecasts of any wind, turbulence, or icing at all relevant altitudes.

One of the major advantages of ADDS is that it relies heavily on user input for innovation and updates. While most of the users who provide feedback are pilots and dispatchers, the ADDS team is quickly becoming aware of the needs of other aviation personnel, such as air traffic control specialists, who use ADDS as part of their aviation decision–making process.

To more efficiently enhance ADDS capabilities, Experimental ADDS (weather.aero) is used as a staging area for new products and innovation. The next iteration of Experimental ADDS embraces a complete redesign of the website with numerous helpful features. Convenience and speedy data access are the rule with the latest update, as a user (each with a specific log–in) has the option of customizing the home screen by adding tiles of the data that are most important to that user. This option saves valuable time for aviation personnel in a hurry to assess the current weather situation. Also added as a result of user requests, a hover–to–zoom feature highlights areas of interest on any data map, allowing the user to simply mouse over any area that might need to be viewed more closely. The Flight Path Tool has also been redesigned with a much more intuitive user interface. Overall, the website presents a distinctly modern feel, with everything accessible by only a few clicks or no clicks at all.

A completely unique feature of Experimental ADDS is the Helicopter Emergency Medical Services (HEMS) Tool, which was created by the ADDS team at the request of the FAA. This launches the same way as the Flight Path Tool and provides detailed information for low–altitude flights, including observations, forecasts, street–level maps in urban areas, and locations of helipads. Since helicopter flights, especially those of emergency medical services, are subject to time–sensitive, small–scale weather situations, the HEMS Tool has proven to be a great way for helicopter pilots to avoid hazardous circumstances. In fact, though the tool is still "experimental", over 1,200 individual users per day employ its services under a special exemption granted by the FAA. As an unanticipated benefit, this tool has also proven very popular with smaller general aviation users as a tool in planning short, low–altitude flights under Visual Flight Rules in local areas. The HEMS Tool is an excellent example of how the ADDS team has met the needs of its user community very effectively.

Perhaps the most powerful and promising aspect of Experimental ADDS is its data services, allowing anyone to access raw text data for a number of different observational and forecast fields. Many different websites use this service as their primary source for aviation data since information can be gleaned from it in many different ways. For example, the Portland Center Weather Service Unit (an NWS service) compiled a map of flight categories across the Pacific Northwest using data obtained from ADDS. Moreover, a major pilots' trade group uses the ADDS data services to display the current weather alongside runway diagrams. The potential of this service is enormous, especially with the future addition of gridded data. One can imagine the many possibilities of overlaid weather data when combined with simple mapping programs, such as Google Maps. Users can expect to see all of the features currently showcased in Experimental ADDS transitioned into operational ADDS in the near future.

Beyond Experimental ADDS, there are many other projects in the works by the ADDS team. Among them are:

The ADDS team is also beginning to cater to the needs of mobile users. Roughly 5% – 10% of hits on the website are from mobile phones. Initially, there are plans to create a mobile version of the ADDS site. In addition, mobile applications of the Flight Path and HEMS Tools are being seriously considered for development for various mobile operating systems such as Apple's iOS.

The ADDS group is eager for feedback from users to guide its future development. To provide your input, contact Arnaud Dumont.