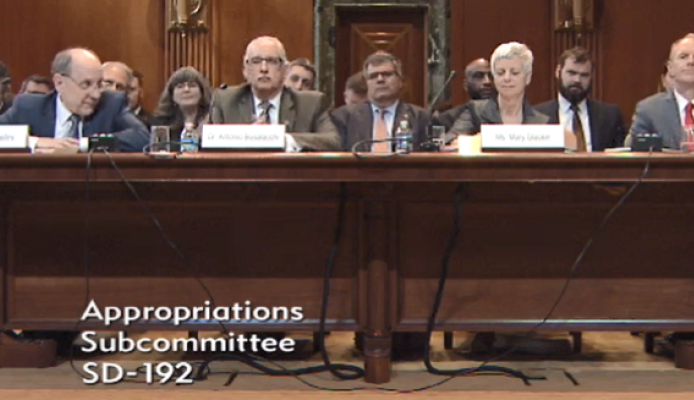 I should also add that NCAR delivered the model two years ahead of schedule and on budget.

On April 4th, the Senate Appropriations Committee’s Subcommittee on Commerce, Justice, Science, and Related Agencies held a hearing to review federal, state, university, and private sector activities being conducted in the area of water hazard forecasting and mitigation. Entitled “National Water Hazards and Vulnerabilities: Improved Forecasting for Response and Mitigation,” the following experts testified before the subcommittee.

In his opening statement, Chairman Shelby said that in 2015 and 2016, property damage caused by flooding alone resulted in 105 deaths and an estimated $20.6 billion in losses. Over that same time period, losses due to drought amounted to $8.1 billion. He cited NCAR’s National Water Model, a predictive tool that simulates water flow across the continental United States, as an example of a recent advancement spurred by university research.

Dr. Uccelini’s testimony highlighted the value of the community-based National Water Model to NOAA.  “The National Water Model is the product of collaboration between federal agencies and universities to solve a complex problem:  tracking water flow across the country to aid local communities and emergency managers in responding to water-related threats.”

This new, operational model emerged from a community modeling framework developed by the National Center for Atmospheric Research (NCAR). It represents a 700-­fold increase in the spatial density of the nation’s water forecast information. With this new level of detailed forecast information, NOAA is working with federal partners, such as FEMA and the U.S. Geological Survey, to effectively communicate when, where, and how deep floodwaters will be during a storm event.

Dr. Buscalacchi cited the National Water Model as an example of the benefits of investing in basic research. “The development and implementation of this [National Water Model] from research to operations could not have happened without sustained collaborative engagements between academia, industry, and government. The implementation has already proved useful in the provision of flood forecasting associated with several anomalous events –including a Hurricane landfall in North Carolina last year and the more recent flood events in California this winter. I should also add that NCAR delivered the model two years ahead of schedule and on budget.”

The National Water Model’s history began with the initial investment in basic research by the National Science Foundation to develop a regional weather research forecast (WRF) tool at NCAR. WRF was developed in an open-platform, open-access community manner that ensured that anyone who wants to utilize it to test forecasting hypotheses, to tune it to specific phenomena, or privatize could easily do so without charge or clearance. WRF’s developers also ensured that it was highly adaptable and portable, so researchers could use it as the foundation for forecasting systems that could predict a wide variety of environmental phenomena.