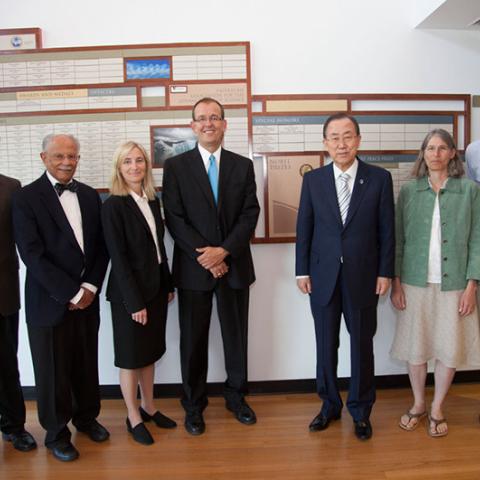 One of the most distinguished guests in NCAR’s 53-year history paid a whirlwind visit to the Mesa Lab this morning. Accompanied by security and support staff, United Nations Secretary-General Ban Ki-moon spent about an hour with UCAR and NCAR leaders and scientists in the Damon Room for a lively briefing and Q&A session on current climate research.

The meeting was part of a daylong visit to the area, with Ban heading on to the University of Denver to receive an honorary degree and visit with graduate students. The NCAR stop was an informal rather than an official diplomatic visit, with no advance announcement and participation by a small, pre-screened group, at the request of the UN’s security personnel.

The buzz was evident to staff members and early-morning exhibit visitors near the Mesa Lab lobby, who clustered along walkways and craned their necks as Ban and his staff were escorted into the building.

Before the briefing, Teri Eastburn (Spark) led the secretary-general—a neighbor of I.M. Pei—through the exhibits on climate change and Mesa Lab design and construction.

“I was wondering whether we could swap my office and your office,” Ban later joked, while gesturing toward the Flatirons in late-spring glory through the Damon Room windows.

The UN delegation was accompanied by Tim Wirth, who represented Colorado in the U.S. Senate from 1987 to 1992 and now serves as vice chair of the United Nations Foundation. “The secretary-general has been a wonderful leader on climate and on energy,” said Wirth, who emphasized the need to understand and explain current climate science and its implications.

“This was a quite compelling presentation,” said Ban after the briefing. He mentioned his own experiences visiting the Arctic and Antarctic as well as Kiribati, one of the Pacific island nations dealing with rising sea levels. He also noted the flooding that affected the United Nations during Superstorm Sandy.

The secretary-general shared his first-hand experiences in visiting nations dealing with sea-level rise and other climate-related impacts. (©UCAR)

“Climate change has been at the top of my priority agenda since I took office,” said Ban in a statement released on the occasion of his visit to NCAR. “It relates to nearly every aspect of the work of the United Nations. That is why it has been discussed at the highest levels, including by the Security Council. It is a humanitarian issue, a development issue, and an issue of security and stability.”

“We hope you can view us as partners in your efforts,” said UCAR president Tom Bogdan as the briefing concluded. “We are, after all, one atmosphere, one people, and one planet.”

Here's a slideshow with more photos from the secretary-general's visit (captions coming soon).

The Daily Camera took video during the introductons and exhibit tour. It's available on their website.