The STEP Hydromet Experiment: working to mprove the short–term prediction of high–impact weather.

The STEP Hydromet Experiment, centered over the Colorado Front Range, will run from 1 June – 31 August 2017 to test the predictive skill of the STEP Hydromet Rainfall Prediction System. Running this system in real-time for the fourth summer in a row,  we continue to work on making substantial advances toward the STEP goals of improving short–term prediction of high–impact weather, particularly heavy rainfall and flash flooding. This fully-integrated hydrometeorological system includes:

For description of the individual components of the Hydromet Prediction System and explanation of real-time plots, click on the above QPE, QPF, QPN, Streamflow and Verification tabs

To view a current set of images from the Hydromet Prediction System, click on Current Images.

There have been increasing demands for accurate hydrological prediction, as urban flooding resulting from heavy rainfall and other high-impact weather has resulted in significant societal and economical costs. Thanks to the improved observation networks, advancement of computer technology, and scientific and technological development of data assimilation, the past decade has seen improvement in quantitative precipitation forecasts (QPF) and streamflow predictions. The ultimate improvement in rainfall and streamflow prediction that can truly benefit society requires a fully coupled (or end-to-end) system that consists of high-resolution observations, state-of-the-art data assimilation and QPF systems, high-resolution, location-specific nowcasts and advanced hydrological modeling.

NCAR’s cross-laboratory science program STEP (Short Term Explicit Prediction) was established in 2005 with the goal to advance the science and application of short-term prediction of high impact weather. STEP scientists have developed various state-of-the-art systems to tackle the challenging problem of accurate prediction of high impact weather, including an automated nowcasting system, rapid cycle radar data assimilation QPF systems, object-based verification systems, and a streamflow prediction system that is coupled with the Weather Research and Forecast (WRF) model. Recognizing the societal need for a coupled system that takes advantage of the state-of-the-art meteorological and hydrological prediction systems, STEP began an effort in 2013 to develop an end-to-end hydrometeorological heavy rainfall and streamflow prediction system. This integrated system was first tested and demonstrated in the summers of 2014-2016 over the Rocky Mountain Front Range region and is being run again during the summer of 2017. 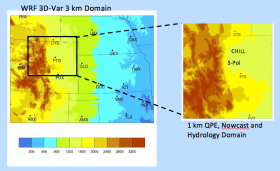 The STEP Hydromet experiment will be conducted in the region of the Rocky Mountain Front Range. This region was chosen because of its high frequency in flash flood occurrence, the existence of an advanced mesoscale observation network, and its social and economic vitality. In addition to several operational NEXRAD radars and dense surface stations, the mesoscale observation network FRONT (Front Range Observation Network Testbed) also includes two S-band polarimetric research radars, the NCAR S-pol and Colorado State University CHILL.

The STEP Hydromet Prediction System is composed of the following components: 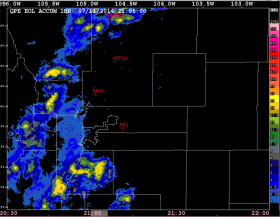 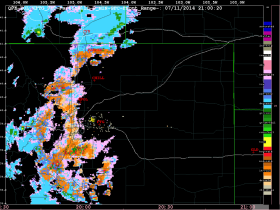 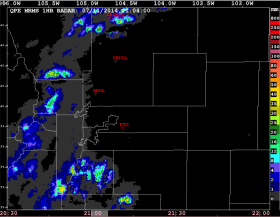 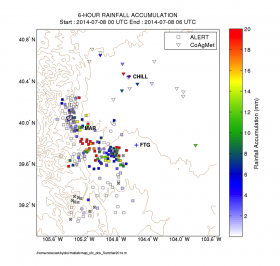 Rain gauge accumulations from the ALERT and CoAgMet gauge networks along the Front Range. Markers with no colors indicate zero accumulation during the accumulation period. The makers with x are the gauge sites that have been possibly decommissioned or temporary inactive.

Radar and rain gauge-based QPE are being used in this prediction system for determining:

QPE fields are being used in this prediction system:

A variety of QPE techniques are being tested. Details of these techniques can be found at: Radar_QPE_processing.pdf

The EOL-QPE field displayed here is the 1 hour rainfall accumulation (in mm). It is a mosaic of QPE values from the three NEXRAD radars (Denver, Cheyenne, and Pueblo).  It is computed using polarimetric radar variables to first determine the type of precipitation (snow, rain, hail) using the EOL Particle Identification algorithm (PID) and then apply a specific algorithm to convert the radar variables for each precipitation type to precipitation rate and accumulation.

Quantitative Precipitation Forecast (QPF) is a critical input for hydrological models in order to produce accurate stream flow prediction. Current operational NWP models are useful in providing guidance for precipitation forecast, but not adequate in providing QPF with timing and location precision that is required by the hydrological models. One of the key aspects in improving the accuracy of short-term QPF is to initialize the NWP models with high density and high frequency data. Through NCAR’s STEP program, data assimilation systems are developed that have the capability to assimilate conventional as well as radar observations. The STEP Hydromet System in 2015 will run WRFDA 3D-Var, a 3-dimensional variational data assimilation system assimilating conventional observations and radar radial velocity and reflectivity data, with 1-3 hourly rapid update cycles.

During the STEP Hydromet Experiment, WRFDA 3D-Var is used to initialize WRF for 0-12h QPF on a 15km/3km nested domain centered at the Front Range region. The QPF products are employed to initialize WRF-Hydro for flash flood prediction. In additional to running WRF 3D-Var with and without radar data assimilation, a baseline WRF will be run  to provide a benchmark for the radar data assimilation system.
To view 0-12h WRF forecasts 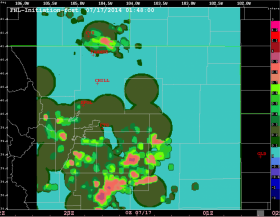 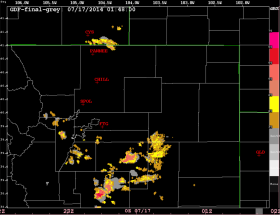 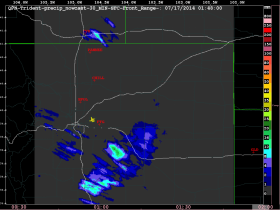 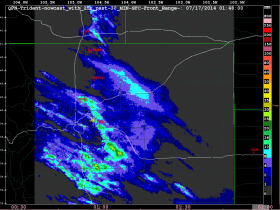 Trident 30 min nowcast with 2 hour past rainfall accumulations (in mm). 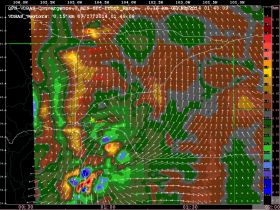 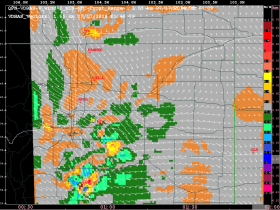 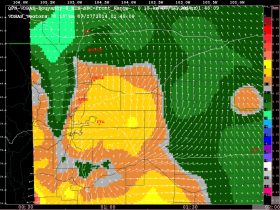 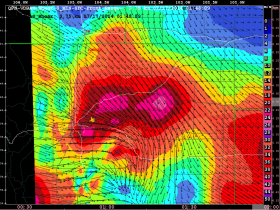 The term nowcasting in Quantitative Precipitation Nowcasting (QPN) is used to emphasize that forecasts are for the very short term period; in this Hydromet Prediction System, the nowcasts are for 0-1 hour in the future and provide explicit prediction of precipitation in space and time. Longer period precipitation forecasts (QPF) currently have insufficient skill in accurately predicting heavy rainfall on the temporal and spatial scales needed for streamflow prediction (100 m resolution) and on the scales at which flash floods occur (a few kilometers). The rapid update frequency and specificity of short-term precipitation nowcasts have higher skill than current NWP forecasts. Thus, QPN is an important component of the  Hydromet Prediction system for improving flash flood prediction and for inclusion in the WRF-Hydro model to increase the accuracy of streamflow prediction.

The nowcasts displayed here are produced by the AutoNowcaster, Trident, and VDRAS systems.

The Variational Doppler Radar Analysis System (VDRAS)assimilates high density and frequency observations from the NEXRAD radars into a convection-permitting model to produce high-resolution analyses of the 4-D winds and other fields that include convergence, vertical velocity, buoyancy, vertical wind shear, CAPE and Relative Humidity.

The STEP Hydromet Prediction System is composed of the following components: 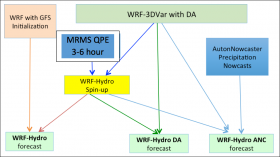 Flow chart for the three versions of WRF-Hydro running during the STEP Hydromet Experiment. 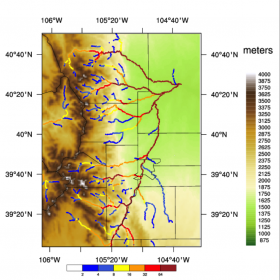 Flood forecasts depend on knowledge of the state of atmospheric features that trigger heavy rain as well as the state of surface and subsurface water, including the heights of rivers and reservoirs and the amount of soil saturation.   Although both meteorological and hydrological models have improved in detail and accuracy over recent years, they can be difficult to operate in a simultaneous and integrated (i.e., coupled) fashion.   The hydrological extension of the Weather Research and Forecasting model (WRF-Hydro) is a community-based framework designed to link models of the atmosphere and terrestrial hydrology. The configuration of WRF-Hydro running in the STEP Hydromet Prediction System is ingests WRF-3DVar atmospheric model output with selected WRF-Hydro hydrology physics options  to produce analyses and forecasts of water cycle processes and streamflow prediction over a range of spatial and temporal scales.

WRF-Hydro is being driven in three ways  during the 2015 STEP Hydromet Experiment:

The flowchart below shows the three instances of WRF-Hydro running on the Yellowstone supercomputer. The past 3 to 6 hr rainfall accumulation obtained from the MRMS radar-based QPE mosaic is used in the WRF-Hydro spin-up period.

Verification
CSI values by model lead time. Each color represents the performance for a different precipitation threshold. Error bars account for uncertainty in the statistics. In this example, model performance for forecasting > 0 mm rainfall peaks around a 4 – 8 hour lead time, then decreases for longer lead times. 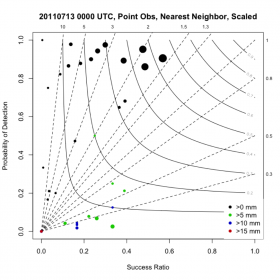 Performance diagrams allow multiple contingency statistics to be plotted at once, giving a quick overview of model performance.  Best model performance is achieved in the upper right corner of the plot.  In this example, the model forecast performance is characterized by high biases (dashed lines), high POD, and low Success Ratio (high FAR) values for the >0 mm precipitation threshold (black dots), resulting in low-to-moderate CSI values (curved polylines). The points representing higher precipitation thresholds (color-coded) are located in the lower left part of the plot, indicating there is room for improvement in forecasts of these larger hourly rain amounts. 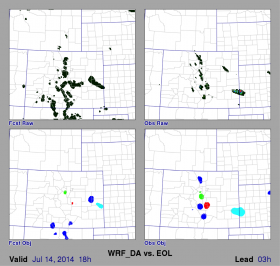 Example of MODE output. The raw precipitation fields from the QPF (upper left) and QPE (upper right) were used to identify precipitation objects. Objects of the same color (green, red, cyan) are matched together between the forecasted and observed precipitation. Blue objects are unmatched between the two. In addition to hits, misses, and false alarms, these objects are used to compare features such as centroid location, object size, and object orientation.

Timely verification of the Hydromet Rainfall Prediction System components can pinpoint strengths of the system, areas for improvement, and aid in interpretation of the forecasts.  Verification statistics will be computed in near-realtime to evaluate the precipitation forecasts from the WRF-3DVar with radar data assimilation, the WRF-3DVar without radar data assimilation, and performance of the radar-based QPE compared to rain gauge precipitation measurements.  Streamflow forecast evaluation will also be included in the system at a later time.

Appropriate evaluation methods answer a variety of relevant questions in areas such as:

A contingency table consists of a tabulation of hits, misses, and false alarms when comparing the forecast to the verification data set.

Example contingency table statistics based on this table include:

The Method for Object-Based Diagnostic Evaluation (MODE) tool provides an objective comparison of the overall structure of the forecasted precipitation with what was observed.  Rather than evaluating hits and misses at a point/neighborhood as is done with the contingency table, object-based evaluation identifies precipitation objects and compares attributes of matched forecast and observed objects.  The attributes considered include area coverage, centroid displacement, intensity, and overlap.