The WRF-Hydro® Project develops leading edge hydrometeorological and hydrologic models and modeling support tools to investigate critical water issues around the globe. As an open platform, we strive to build and support a diverse and inclusive community of hydrologic scientists and practitioners to meet worldwide needs for water resource planning, hazard prediction and mitigation.

Water itself is boundless; so should be the community that studies it.

Scientists and society need a way to understand and predict how the complex components of the water cycle interact with the complexities of the landscape in order to provide data and information to address issues relating to water availability, water quality, hazards and impacts both in the short term and long term and across scales.

WRF-Hydro model output can supply forecasters and decision makers with locations and timing of rapid river stage increase as well as the duration of high waters and inundation while accounting for landscape dynamics essential to flood risks such as land cover change as well as the control effects of infrastructure such as dams and reservoirs.

Like the WRF model it does not attempt to prescribe a particular or singular suite of physics but, instead, is designed to be extensible to new hydrological parameterizations.  Although it was originally designed to be used within the WRF model, it has evolved over time to possess many additional attributes as follows: 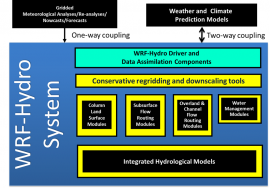 The architecture is intended to significantly simplify the often laborious task of integrating, or coupling, existing and emerging hydrological models into the WRF modeling framework.  In doing so, an extensible, portable and scalable environment for hypothesis testing, sensitivity analysis, data assimilation and environmental prediction has emerged.

The WRF-Hydro system has adopted a ‘community-based’ development processes with an open and participatory working group environment.  NCAR in collaboration with other NSF and university entities are developing a support structure for WRF-Hydro in the way of model documentation, public, online code repositories, test cases and many pre- and post-processing utilities.

The WRF-Hydro system has been applied for a wide range of research and operational prediction problems both in the U.S. and abroad.  Specific past projects include flash flood prediction, regional hydroclimate impacts assessment, seasonal forecasting of water resources and land-atmosphere coupling studies. An important aspect of WRF-Hydro system has been serving as the core model for the new National Water Model.

Applications & Collaborations Around the World

Diagnosing the Impacts of Disturbed Landscapes on Coupled Hydro-meteorological Predictions