The future of water prediction: WRF-Hydro®

To address concerns like water availability, hazards, and impacts, in the near and long term, and across scales, scientists and society need methods to understand and predict how each element of the water cycle interacts with the landscape. WRF-Hydro does this by linking multi-scale process models of the atmosphere and terrestrial hydrology to provide:

Although it was originally designed to be used within the WRF model, it has evolved with additional attributes such as an efficient coupling architecture enabling its embedding within (or coupling to) other types of Earth-system models, methods for spatial transformation on different spatial grids, parallel code development for compatibility with cluster and higher performance computing systems, and standard data format and metadata compliance. This agility and transferability makes it ideally suited to explore answers for current and emerging societal needs. WRF-Hydro’s defining feature is its ability to predict streamflow along the entire river reach, thus providing needed guidance in acute flooding scenarios saving lives and property. 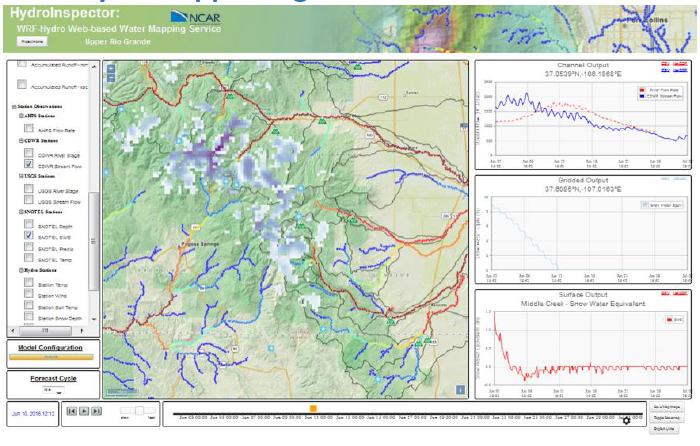 The WRF-Hydro system has been applied across a wide range of research and operational prediction problems both in the U.S. and abroad.

A configuration of WRF-Hydro was adopted by the National Weather Service as the operational NOAA National Water Model (NWM), which continuously forecasts hydrologic risk across the continental United States and is considered the future of national water prediction. The NWM has expanded its forecasting capability to Puerto Rico, Alaska, Hawaii, and the Great Lakes regions.

NCAR also collaborates with other NSF and university entities to establish the community resources and support structure for WRF-Hydro. As an open source, open-platform model, the WRF-Hydro® Modeling System will continue to evolve to meet global needs for water resource planning and management information, while also providing a pathway for academic researchers and private partners to innovate improvements in water prediction.