WRF-Solar® is the first numerical weather prediction model specifically designed to meet the growing demand for specialized numerical forecast products for solar energy applications (Jimenez et al. 2016). WRF-Solar is a specific configuration and augmentation of the Weather Research and Forecasting (WRF) model. The version 1 of the model was developed within the Sun4Cast® project funded by the U.S. Department of Energy that targeted to improve solar power forecasts at a wide range of temporal scales (Haupt et al. 2016). 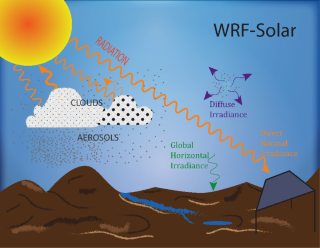 Sketch representing the physical processes that WRF-Solar® improves. The different components of the radiation are indicated.

The Community Version of WRF-Solar is in the public domain and can be downloaded from the official WRF Github repository. The WRF version 4.2 includes the enhancements of WRF-Solar Version 1 with upgrades in the physical parameterizations as well as other developments.Users are encouraged to use version 4.2.2 or upcoming versions.

This website provides a description of the model, the user’s guide, a reference configuration that should be used as a baseline for comparison by the WRF-Solar community, and ongoing developments.

Please visit the WRF-Solar forum if you are having troubles running the model.

The development of WRF-Solar® Version 1 provided the first numerical weather prediction model specifically designed to meet the needs of irradiance forecasting (Jimenez et al. 2016a). The first augmentation improved the solar tracking algorithm to account for deviations associated with the eccentricity of the Earth’s orbit and the obliquity of the Earth. Second, WRF-Solar added the direct normal irradiance (DNI) and diffuse (DIF) components from the radiation parameterization to the model output. Third, efficient parameterizations were implemented to either interpolate the irradiance in between calls to the expensive radiative transfer parameterization, or to use a fast radiative transfer code that avoids computing three-dimensional heating rates but provides the surface irradiance (Xie et al. 2016). Fourth, a new parameterization was developed to improve the representation of absorption and scattering of radiation by aerosols (aerosol direct effect, Ruiz-Arias et al. 2015). A fifth advance is that the aerosols now interact with the cloud microphysics (Thompson and Eidhammer 2014), altering the cloud evolution and radiative properties (aerosol indirect effects), an effect that has been traditionally only implemented in atmospheric computationally costly chemistry models. A sixth development accounts for the feedbacks that sub-grid scale clouds produce in shortwave irradiance as implemented in a shallow cumulus parameterization (Deng et al. 2014).

Several works highlighted the benefits of the solar augmentations for solar irradiance forecasting. WRF-Solar largely reduced errors in the simulation of clear sky irradiances wherein is important to properly account for the impacts of atmospheric aerosols (Jimenez et al., 2016a). WRF-Solar have also been shown to reduce biases in the surface irradiance over the contiguous U.S. in all sky conditions (e.g. Jimenez et al. 2016b). In a formal comparison to the NAM baseline, WRF-Solar showed improvements in the Day-Ahead forecast of 22-42% (Haupt et al. 2016). Another work has pointed out the potential of WRF-Solar for nowcasting applications (Lee et al. 2016).  The study compared solar irradiance predictions using different nowcasting methodologies based on artificial intelligence or the utilization of satellite imagery to detect clouds. The comparison has shown that WRF-Solar was competitive, and in many times superior to these state-of-the-science methodologies of the short-term prediction (1-6 h).

The augmentations introduced in WRF-Solar Version 1 have been progressively incorporated in the official WRF release. All are available to the community since the WRF release version 4.2. The parameterizations introduced in Version 1 have been revisited, and enhancements and bug fixes have been introduced. In addition, new functionality has been incorporated. The model can output the clear sky irradiances and includes a solar diagnostic package. This new package adds to the standard output a number of two-dimensional diagnostic variables (e.g., cloud fraction, vertically integrated hydrometeor content, clearness index, etc). The solar diagnostic package can output these variables and the surface irradiances every model time step at selected locations.