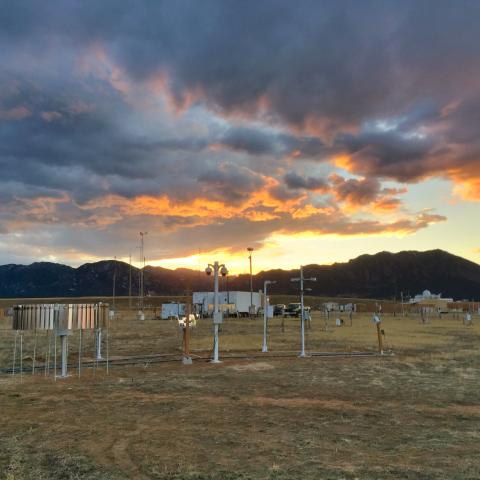 Sunset panorama of the Marshall Field Site with the Foothills in the background.

Hidden-in-plain-sight on over 70-acres of land southeast of Boulder is a world-class atmospheric research site, run and maintained by NCAR’s Research Applications Laboratory (RAL), but open to the wider research community. The Marshall Field Site Instrument Testbed is an outdoor experimental lab ideally located at the base of the foothills. This site is visited each season by wide-ranging weather conditions such as strong downslope windstorms, freezing precipitation, upslope snow storms, and thunderstorms. 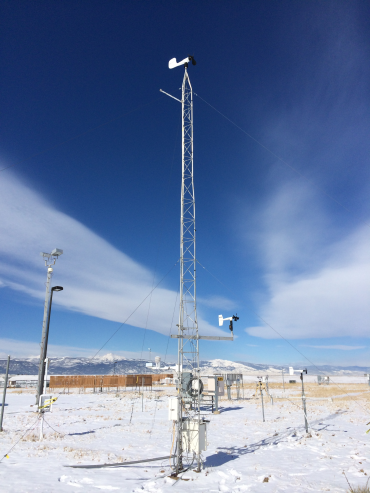 Over 50 years ago, NCAR’s sponsor, the National Science Foundation, saw the potential in this real estate for providing a location where outdoor experiments could be conducted in a flat, open area with no surrounding obstructions. Presciently, NSF leased, then purchased the Marshall Field Site to be used for research and testing purposes. It now boasts a long record of instrument development, testing and refinement over the years, including winter weather research.

Passengers flying commercially on a wintry day might witness snow and ice accumulating on the wings of their aircraft outside their window. This can be alarming for pilots as well. After a number of high-profile aircraft accidents were linked to snow and ice buildup on aircraft in the 1990s, the FAA approached NCAR scientists to help them develop techniques to ensure that aircraft icing practices would prevent future accidents. In support of aircraft ground de-icing operations, a test bed was established at the Marshall site for the purpose of collecting and accurately measuring snowfall rate in real time. Unlike rain, snowfall is particularly difficult to measure because wind causes the precipitation to blow horizontally rather than fall downward, issuing a challenge to accurately collect snow in precipitation gauges.

NCAR scientists developed a suite of measurement techniques using a variety of precipitation gauges and wind shields to diminish the horizontal momentum of the snowflakes. The Marshall site proved to be an ideal testing environment for gathering accurate measurements of snowfall rate. Based on the data gathered from these ground-based precipitation gauges, scientists discovered that information on the liquid water equivalent (LWE) snowfall rate was critical for determining how long the deicing and anti-icing fluids would provide protection after being applied to an aircraft under specified precipitation rates and ambient air temperature. As more data were collected from the Marshall site, RAL scientists developed a state-of-the-art, integrated display system that depicts accurate, real-time nowcasts of the snowfall LWE rate. This display interface was tested at several airports around the country by ground personnel conducting aircraft de-icing operations, airline station-control managers coordinating flights, airport managers coordinating runway plowing activities, and air traffic controllers involved in gate-hold program planning. After extensive testing and favorable reviews, the system was adopted by the FAA as an alternative method that airports could use for determining how long deicing and anti-icing fluids would remain effective during snowfall conditions. At least one vendor is now actively marketing the technology to airports around the world.

More recently, NCAR scientists have worked with other FAA programs on sensor testing at the Marshall site in support of improved precipitation-type detection sensors. The current U.S. weather observing network, composed of over 900 stations (referred to as the Automated Surface Observing System [ASOS]), is planning to upgrade their aging weather type detection sensor due to its inability to report certain weather types. The ASOS can report rain, snow, and freezing rain, but cannot report drizzle, freezing drizzle, ice pellets, or instances where more than one of these precipitation types is occurring at the same time. With FAA support, NCAR scientists tested several present-weather sensors to determine their accuracy in detecting and reporting the various precipitation types. With the initial testing complete, NCAR scientists are now transitioning towards developing and testing methodologies that report conditions when multiple precipitation types are occurring at the same time.

Improved Precipitation Measurements around the World

Not only was Marshall the only U.S. site selected for the study of sensors measuring solid precipitation, it hosted more sensors than any other international participant. Furthermore, the WMO tasked NCAR to manage all the data gathered from 14 data collection sites scattered all over the globe.

“As weather, climate and the water cycle know no national boundaries, international cooperation at a global scale is essential for the development of meteorology, climatology and operational hydrology as well as to reap the benefits from their application.” This is the mandate of the World Meteorological Organization (WMO), an authoritative agency of the United Nations for advising policy with respect to weather and climate, operational hydrology and related geosciences.

Precipitation gauge technology has advanced considerably over the years, and the focus has shifted toward automated techniques. Exploiting its proven capabilities and impressive infrastructure, NCAR’s Marshall Field Site was selected as the sole U.S. location for an international program studying the performance of modern automated sensors measuring solid precipitation. The Marshall Field Site continues to host the testing of new gauges and other solid precipitation measurement techniques as part of the WMO Solid Precipitation Inter-Comparison Experiment (SPICE) program.  Not only was Marshall the only U.S. site selected, it hosted more sensors than any other international participant. Furthermore, the WMO tasked NCAR to manage the data gathered from 14 data collection sites scattered all over the globe. This is a testament to NCAR’s expert data processing capabilities, and its data management and data assimilation techniques.

The Marshall site in Boulder is an excellent environment for testing sensors under a variety of weather conditions, but testing in even more extreme conditions could provide greater information on gauge performance and help answer questions about precipitation processes in these extreme environments. The NSF sponsored a three-year field program in Antarctica to test recent advances in technology to determine whether accurate snowfall measurements are now possible in polar conditions where temperatures can drop below minus 50 degrees Fahrenheit and wind speeds can exceed hurricane force. Built and tested at the Marshall site, NCAR scientists, in collaboration with scientists at the University of Colorado, Boulder, designed an automated system, complete with precipitation gauges and wind shielding, to measure the small amount of snow that falls in the Antarctic regions. After testing at Marshall, these systems were installed in various Antarctic locations near McMurdo Station and then collected data year-round. This ongoing field project will supply researchers with critical information about how much snow is added to the polar ice caps, and help climatologists build a better understanding of sea level rise associated with climate change. 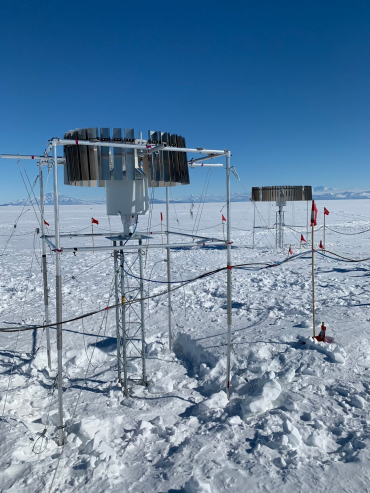 Single Alter at Willie Site outside of McMurdo Station

To build upon the nation’s Climate Reference Network, NCAR’s Marshall Site was strategically selected by NOAA in 2008 to support their objective of accurately measuring precipitation with state-of-the-art precipitation gauges and shields, temperature, and wind-speed instruments. The data gathered will be used to provide high quality, long-term observations to directly foster the nation’s goal of providing future long-term homogeneous temperature and precipitation observations that can be coupled to long-term historical observations for the detection and attribution of present and future climate change. NOAA and NCAR continue to jointly develop and test new forms of gauge shielding to improve precipitation gauge collection processes while simplifying the installation of the gauge wind shielding and minimizing costs related to wind-shield components.

(All photos for this article were taken by Scott Landolt)