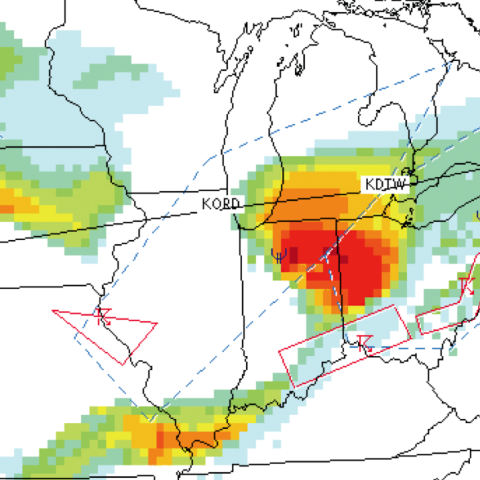 “We’ve finished the job. We’ve done what we needed to do.” 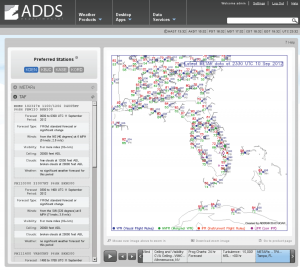 User-customizable dashboard of Experimental ADDS
“It feels like the kids are all grown up, have found jobs, and are moving out of the house.”

“United has greatly appreciated the value of the experimental Aviation Digital Data System (ADDS) in helping to validate the innovative products being developed by the National Center for Atmospheric Research (NCAR).  We look forward to using other means to help with product validation in the future.” 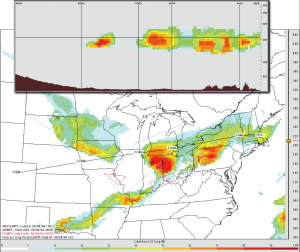 The Flight Path Tool allows pilots toview weather along any custom flight route.
“Hundreds of thousands of commercial, military and general aviation pilots who use AvnWx.comhave directly benefitted from the clean and timely weather data provided by NCAR’s Experimental ADDS. I have relied on Experimental ADDS, and its responsive staff to think outside-the-box when it comes to disseminating information in a way that truly helps those of us who fly.”

For current, in-flight, and destination weather conditions, pilots depend on a weather briefing before taking to the skies. In the old days, these would look like rip-and-read alphanumeric reports using dial-up modems. These reports provided an overwhelming amount of information to wade through: temperature, winds, visibility, freezing rain, turbulence, thunderstorms, etc. Not only were they cumbersome, at times they were fraught with error. Pilots needed information that synthesized the volumes of data they were required to ingest before taking off.

By the mid-1990s, when people were realizing the potential of the Internet, NCAR approached the FAA with a proposal to get weather information to pilots in a novel fashion.  By tapping into NCAR’s scientific and engineering expertise, and its earlier success of identifying and forecasting microbursts, it proposed to provide the new gridded aviation products along with the traditionally used advisories and reports, such as AIRMETs, SIGMETs and METARs, and provide them in a user-friendly, easy-to-read, format. The FAA agreed to fund the work and the Aviation Weather Center agreed to operate the site. Initially, the FAA regulatory organization was skeptical. Information from the Internet, they believed, was not to be trusted. It took time and a level of comfort, but eventually the FAA embraced the use of the Internet, developing a process to use it (Qualified Internet Content Provider or QICP), which is still used today. Operational ADDS was born. Gone were the days of beeping modems, mountains of teletype texts and information overload.

Since then, a long and fruitful relationship grew from the R&D side in Boulder, CO to the operations side at NOAA’s Aviation Weather Center (AWC) in Kansas City, MO. Experimental ADDS introduced prototype weather products to the aviation community while gathering feedback on the products' utility from the users. Following the rigorous review and approval process, products got the green light for operational use. “Experimental ADDS lets users kick the tires and give us feedback before moving to operational status,” said Bob Barron, Deputy Director for Engineering of NCAR’s Aviation Applications Program.

Arnaud Dumont, software engineer and ADDS team lead, agreed. “What makes ADDS unique is that it took all of the traditional products used for years and made them easier to use. Four-D tools now allow the user to slice, dice, zoom and overlay grids with traditional products.”

““The HEMS Weather Tool has made one of the most significant impacts on improving aviation safety for pilots than any other weather reporting advancement in over 20 years. Pilots now make faster, better and more informed decisions due to it; it has no doubt saved lives by allowing for better and more informed decision making to take place prior to the initiation of a flight. After almost 40 years in aviation my go to weather reporting system of choice is the HEMS Weather Tool that NCAR developed.””

“Every Helicopter Air Ambulance pilot in the country has embraced the HEMS Weather Tool as one of their primary go-to weather reporting systems.”

In May, the Helicopter Emergency Medical Services (HEMS) tool became operationally available on the National Weather Service Aviation Weather Center’s website (http://www.aviationweather.gov/hemst).  HEMS is a natural extension of NCAR’s ADDS program, and provides helicopter pilots easy-to-use web access to a variety of critical aviation weather information. It was developed at the request of the FAA after a 2006 review of rescue helicopter crashes revealed that a lack of detailed weather information was often a factor.

"We use ADDS Data Services for our popular and widely used OS Aero Weather app. ADDS Data Services help us tremendously providing up-to-date and precise weather data to our users. The interface for requests has a very clear structure and offers a great variety of constraints to retrieve very specific data sets. It perfect to build highly customized applications and tools. We really appreciate the work done by NCAR providing these high-level services."

NCAR will continue to be a leader in aviation weather research and development. Its model of focusing on the end-users’ requirements and input at each step along the development path has a proven track record. Development of useful aviation applications requires a strong connection between its work and the needs of aviators, and current R&D efforts to address those needs include in–flight icing; snowfall and freezing precipitation; convective storm nowcasting and forecasting; atmospheric turbulence; ceiling and visibility; and oceanic weather. While Experimental ADDS has graduated to the operational side, much more work in aviation weather hazards at NCAR continues.

Laura Curtis is a writer for NCAR's Research Applications Laboratory