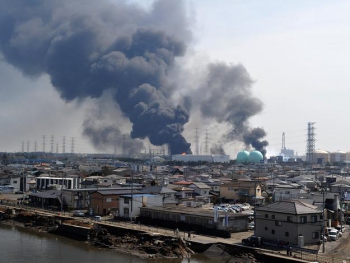 Following the devastating earthquake and tsunami that severely damaged the nuclear power plant in Fukushima Japan, an unknown quantity of radioactive material was released into the air and water surrounding the damaged nuclear power plant. Accurately characterizing the radiation released from the Fukushima plant is an ongoing process for Japanese researchers and government officials who support decisions impacting the safety of people living and working near Fukushima.

Unfortunately, the radiation source term estimation (STE) problem for the Fukushima incident poses some unique challenges that have yet to be fully addressed by the scientific community. As a result, there is large uncertainty in the current estimate of the radioactive material released and a corresponding large uncertainty in the radiation fallout estimates and environmental impact that are critical to the public safety decisions described above. The proposed workshop will bring together leading STE and atmospheric dispersion researchers from Academia/Private Industry/Government/National Laboratories in the United States (US) and subject matter experts (SMEs) from Japan with expertise in observations and STE for the Fukushima incident. The goal would be to present current approaches, available data, and discuss how the current state- of-the-science can be extended to address these challenging unanswered questions. We anticipate that the results of this workshop will provide recommendations for a set of scientific options that can be used to provide a better quantification of the amount of airborne radiation released from the Fukushima power plant, and inform the broader scientific community of how to tackle this type of problem. The results will be provided to our Japanese colleagues to address their immediate needs and published in a peer-reviewed journal to inform the broader scientific community.